The IUFOC Spanish event will take place Sunday February 26th from 4 – 6 PM at the Fort McDowell Resort & Casino in Fountain Hills, Arizona. Tickets can be purchased for $25.00 in advance at ufocongress.com or at the door. 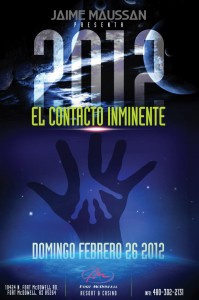 “This marks a special event for the Phoenix area – we really wanted to embrace the Spanish population here to expand the awareness of the phenomena,” Says Conference Co-Organizer Maureen Elsberry, “It’s about finding new ways to make the information accessible to everyone.”

The main feature will be Jaime Maussan’s vivid presentation 2012 El Contacto Inminente which will feature many stunning UFO videos and images . Jaime Maussan will present the results of the best UFO investigations based only in the facts and proof that show that we are facing an “imminent contact.”

The International UFO Congress will run February 21-26th and features over 20 presenters, panels, vendors, a free UFO film festival and more. More information on the conference can be found at UFOCongress.com.