According to Argentinean news, thousands of people spotted a UFO on Sunday in and around the town of Gualeguaychú.

Several Argentinean news outlets reported the sighting, although there is not much detail given. What was seen is most often described as a bright light that slowly moved over the city. According to Argentinian news website Noticias Villaguay, one witness described the light as “a white light, large, and down green.”

Some say the light blinked on and off periodically, and at one point disappeared. This can be seen in at least one of the several videos captured by witnesses and posted to YouTube.

The object was also seen in the town of Larroque, which is about 20 miles west of Gualeguaychú. Witnesses also reported that they saw a similar object the night before on Saturday, January 3.

Some have speculated that the object was a drone, or a lit up glider. But according to Maxima Online, others disagree. They say that a drone or glider would not have been seen as far away as 20 miles.

Several witnesses captured video, although not much can be seen but a light in the sky. In fact, in several videos the light seems to be stationary. However, slow movement and blinking can be seen in others.

One YouTube witness wrote in the description of his video: “The filming is dense that no cuts or anything edition only music so you do not think it’s fake.”

In another video people can be seen out on the street watching the object. That witness wrote in their video’s description: “Thousands of reports came in Pueblo Belgrano neighborhood, Gualeguaychú and Larroque. They speak of a powerful and zigzag light traveling through the sky.”

Gualeguaychú is in the Argentinean province of Entre Ríos, near the border with Uruguay. It is most famous for its yearly carnival, which begins on January 10. 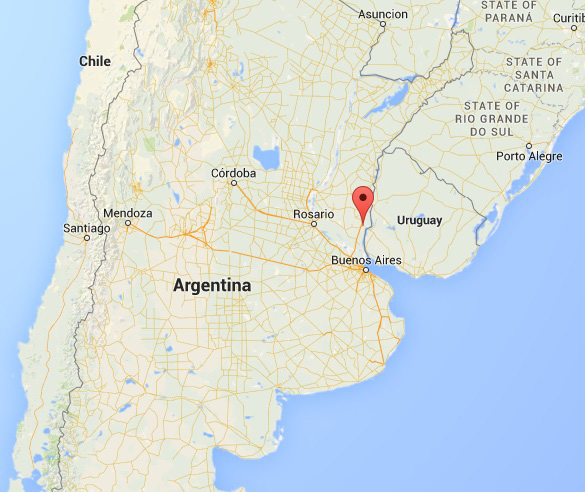 In 2011, the Argentinean Air Force followed the lead of several of its neighbors, including Chile and Uruguay, and created an official UFO investigation organization. They are called the Commission for the Investigation of Aerospace Phenomena (Spanish acronym CIFA). Since their inception there has not been much information released regarding their work. One would expect this would be the sort of case they have been waiting for, given the media attention it has received.

Whether or not CIFA will investigated this case is yet to be seen. Thus far there have not been any comments posted by any Argentinean officials or law enforcement regarding this sighting.

Note: We were first made aware of this story by a posting on The UFO Chronicles.