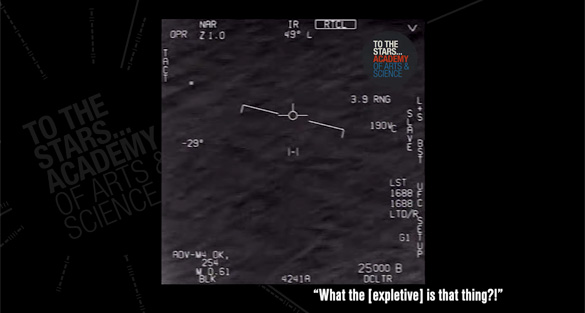 To the Stars Academy (TTSA) posted a third Department of Defense (DoD) UFO video in coordination with the posting of an opinion piece by TTSA member Chris Mellon in The Washington Post. Mellon is a former deputy assistant secretary of defense for intelligence. He served during the Clinton and George W. Bush administrations. Mellon is a current the national security affairs advisor for TTSA.

This video is perhaps the most impressive, but very few details about the video were released, and although most of the media attention has been supportive of the DoD’s UFO program, some doubts and confusion have also arisen.

The new video is being referred to by the TTSA as the “2015 GO FAST FOOTAGE.” According to TTSA, this video, as with the others, is from the Advanced Targeting Forward-Looking Infrared (ATFLIR) system of a U.S. Navy F/A-18 Super Hornet. The actual footage of the object is a little over 30 seconds long. The TTSA video presenting the footage is about two minutes long with an introduction that includes a description of the telemetry seen on the screen of the ATFLIR system.

Two Navy jet-fighter pilots are commenting on the object in the video. Both appear to be very excited about the object. When the video starts, the UFO darts across the screen as the ATFLIR operator is attempting to get a lock on it, which he finally does. The object seems to be moving very fast below the jet-fighter. The telemetry shows that the aircraft capturing the video is at 25,000 feet traveling at 259 knots (approximately 300 mph).

The object appears to be round. ATFLIR displays heat, but as demonstrated in a graphic on the TTSA website, aircraft shape is still discernible with these systems, and in this case, no wings or exhaust are apparent. 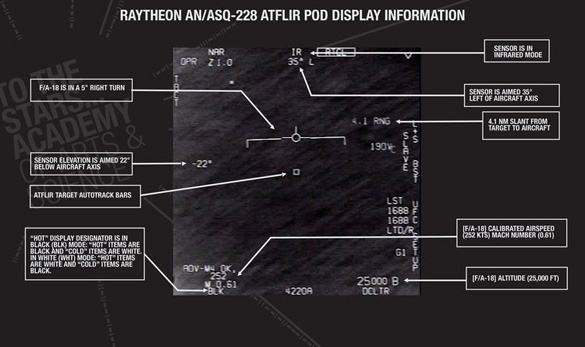 The ATFLIR display reveals significant information regarding flight conditions and characteristics of the imagery. (Credit: To the Stars Academy)

As to when and where this video comes from, we have only a couple of pieces of information. The TTSA website states, “The date, location, and other information has been removed by the originating authority as part of the release approval process.” However, the title indicates the video is from 2015. Also, in the Washington Post article, Mellon describes the video as a “Navy encounter that occurred off the East Coast in 2015.” 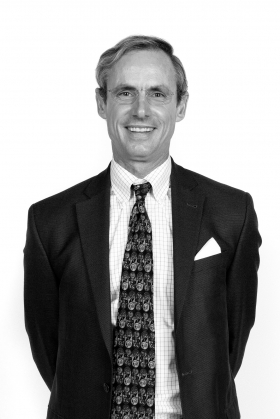 It should be noted that these videos have were all posted by TTSA. The DoD has not directly provided them to anyone else, yet. TTSA notes on the GO FAST video, “While TTSA was the first to obtain a copy, it should be available to any member of the press or public via the Freedom of Information Act [FOIA].” However, of the several researchers who have submitted FOIA request I am aware of, none have received copies of the videos. In fact, the responses the DoD have given are a bit odd.

John Greenewald of TheBlackVault.com is an experienced FOIA researcher with perhaps the most extensive online repository of documents received via FOIA requests. Greenewald has several FOIAs filed in regards to these videos and their release. One of the first he submitted was for the records of Luis Elizondo, the former head of the Advanced Aviation Threat Identification Program (AATIP), the agency that investigated these videos and determined them to be unknown. Greenewald also sent a FOIA to the National Security Agency (NSA) for information about AATIP. In both cases, he was told no records exist. The response may be due to the way in which the requests were submitted. For instance, when he filed the first FOIA, he was not sure of the exact name of the DoD UFO program. In the second FOIA, he was asking for NSA records in a particular database which may not have records on AATIP. Greenewald says over the phone an NSA representative did confirm to him the name of the program is Advanced Aviation Threat Identification Program. AATIP has been called Advanced Aerial Threat Identification Program, among other variations. Apparently, the NSA is aware of the program. 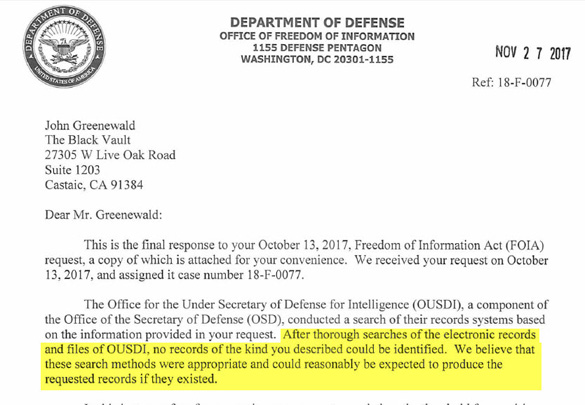 Government UFO documents researcher Paul Dean has filed a FOIA requesting the forms regarding the declassification of the videos. The response he received says his request “has been placed in our [Office of the Secretary of Defense and Joint Staff] complex processing queue and is being worked based on the order in which the request was received. Our current administrative workload is approximately 2,246 open requests.”

It may be some time before Dean receives any further information. All of this indicates that TTSA’s suggestion that researchers use FOIA to obtain more information is going to be a lengthy and challenging process.

The documents are particularly relevant because there have been some mixed messages from government agencies. Although the DoD confirmed to the New York Times that AATIP existed, according the UK tabloid The Sun, a spokesperson for the U.S., Defense Intelligence Agency told them “There is some confusion about this program and claims about its purpose in press reporting… the Defense Intelligence Agency has not released any information, files or videos.”

More recently, an article covering skeptic perspectives on the videos in CNET claims a spokesperson for the Office of the Secretary of Defense said “The Department of Defense did not release those videos. I cannot confirm their authenticity. I don’t have any additional info to provide.”

Still, despite these confusing statements, mainstream media seems to mostly be taking Elizondo’s word in regards to his conclusions regarding the mysterious nature of the videos. Senator Harry Reid and Navy pilots have backed his claims. However, even though Elizondo says AATIP still operates today, most mainstream media outlets are still reporting that the program closed in 2012. That is when the DoD says they stopped funding AATIP. Elizondo says AATIP continued after 2012, and he told me that since he left AATIP this past October, a high ranking official has replaced him as the chief of the program. In his interview for the International UFO Congress, Elizondo explained that after they lost funding, “we very quickly continued our efforts and we started to dual-use a lot of what we were doing.”

“…as an example, one may be interested in putting out a requirement looking for let’s say advanced ICBM technology,” Elizondo continued. “So you would go out, and you would ask folks, ‘I want you to be able to give me a paper that helps me understand anything coming into Earth’s orbit with these particular profiles.’ So hypersonic velocities, loads over ability et cetera, and what might be useful for let’s say identifying North Korean ICBM missiles coming into the continental United States could also be useful in identifying other objects, things that are coming in with that same flight pattern but not necessarily a ballistic missile.” 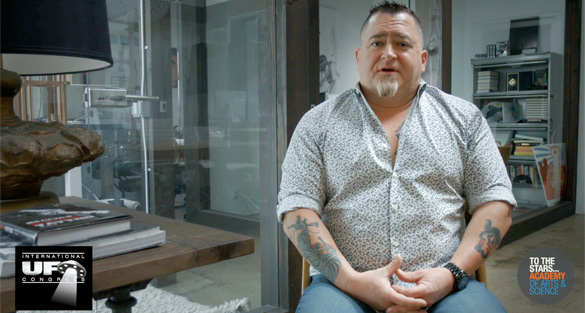 In an interview on Open Minds UFO Radio, Leslie Kean, one of the authors of the New York Times article that broke the AATIP story in December, referred to a memo regarding the release of the videos by the DoD. She was not at liberty to share the document with the public at that time. The release of this memo would help clear up some of the questions.

Despite the many loose ends and unanswered questions dangling out there, the media seems to be accepting that indeed UFOs are a real phenomenon in which the U.S. government has had an interest. The gist of Mellon’s Washington Post article, titled “The military keeps encountering UFOs. Why doesn’t the Pentagon care?,” is that it is time the U.S. government take this issue more seriously.

When asked by a BBC Radio 5 host what the military should do about UFOs, Mellon responded, “The first thing we need to do for national security and scientific reasons is to increase collection, analysis and research and development.”

“We have in existence proof here that there are propulsion capabilities and aeronautical capabilities beyond what we have,” Mellon explained. “Ergo, we ought to expand research and development in promising leads that might provide us with similar capabilities. At the same time, we can easily and dramatically expand our knowledge and understanding simply by putting someone in charge and try to answer the question.”

According to Mellon, various government agencies and branches of the military do have an interest in UFO incidents, but they do not share information with each other. Nor do they apply the necessary resources to figure it out. He seems to agree that these cases Elizondo has identified as significant are worthy of a renewed effort to take a serious look, with the appropriate resources, at the UFO phenomenon.

Mellon writes, “…the national security implications of these incidents are concerning — but the scientific opportunities are thrilling. Who knows what perils we may avoid or opportunities we might identify if we follow the data?”

Note: This article was updated on March 22 as a result of a clarification by Leslie Kean. The DoD memo regarding the release of the videos is in the possession of the authors of the New York Times article posted on December 16, 2017. She is not aware of whether TTSA also has a copy of the memo. She adds, “there is absolutely no question that the videos were cleared by the DOD from their files.”