Home / Articles / The ‘Space Balls’ – A case of mistaken identity
The recent story of a mysterious “space ball” found in Namibia, Africa last November, which left that country’s National Forensic Science Institute baffled, has now been identified as a type of space debris.

The ‘Space Balls’ – A case of mistaken identity 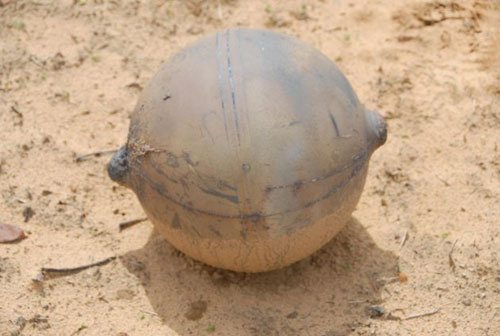 The recent story of a mysterious “space ball” found in Namibia, Africa last November, which baffled for a while that country’s National Forensic Science Institute, has now been identified as a type of space debris known as a Composite Overwrapped Pressure Vessel (COPV), according to a story posted by Discovery News. The metallic ball discovered in a Namibian grassland is 1.1 meter in diameter and weighs 13 pounds. 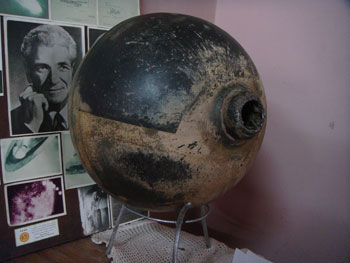 One of the space spheres on display at the UFO Vision Museum in Victoria, Argentina; photo of George Adamski in the background. (Credit: Open Minds Production)

I am, in fact, quite familiar with these objects since I published a short article about them as a sidebar to my feature story, “3 International UFO Crashes” in Open Minds magazine Issue 8 (June/July 2011). The gist of that article dealt with three mysterious incidents involving possible UFO crashes in Shag Harbour, Canada (1967), Tarija, Bolivia (1978) and Dalnegorsk, Russia (1986), all of which were officially investigated at the time and still remain unexplained.

The sidebar, “The Metallic Spheres – a case of mistaken identity,” however, did not remain unidentified, and was put there as an example of so-called space mysteries that can be successfully explained, although some ufologists prefer to keep the mystery alive and suggest they may be of alien origin. These metallic balls have been falling to different parts of the Earth—mostly in Africa and Latin America—for a number of years, causing sometimes a bit of stir in the local press. They are on exhibit in at least two museums in Argentina. Hoping to discourage further confusion with real UFO-related stuff, we post below my article from Open Minds magazine, adding several photos that were not used in the original print copy.

THE METALLIC SPHERES – A CASE OF MISTAKEN IDENTITY

Two space spheres on display in the patio of the Firmat Museum in Santa Fe, Argentina. (Credit: Open Minds Production)

Some of the Project Moon Dust documents declassified by the Defense Intelligence Agency (DIA) include reports of mysterious metallic spheres found scattered in many countries around the world like Bolivia, Chad, and New Zealand. Other similar cases not in the DIA documents were reported in Argentina and Mexico. Usually these cases were readily identified as some kind of space junk, but occasionally they were treated as fragments from crashed UFOs. A couple of these spheres are even on display at the “Visión OVNI” (UFO Vision) Museum in Victoria in the province of Entre Ríos, Argentina. Among the Mexican cases, one was found in Chiapas in 1996, two in Tamaulipas in 1994 and 1996, and another obtained by famous TV journalist Jaime Maussán in 2008, all of which were claimed as possibly UFO-related fragments. Yet there can be little doubt that all these “space balls” are mundane parts of the Russian or American space programs and not real UFO artifacts.

Here is a representative Moon Dust memo from the Republic of Chad in Africa, dated October 10, 1970:

This report forwards photographs of object believed to come under Project ‘MOON DUST’. The object was seen falling in an area 30 kms N.E. of LAI (0924N-1618E) on 1 August 1970. It produced three loud explosions on landing and was said to have burned for five days. The sphere weighs 30 pounds and has a circumference of four feet. A second object was found in the same general area. It however, resembles an automobile shaft. Photographs of this object are forwarded.

A longer Moon Dust document, dated August 17, 1979, concerns “an unidentified object having been found on a farm near Santa Cruz” in Bolivia, described as “about three times the size of a basketball.” The document quoted the director of the Air Force Academy, Col. Ariel Coca, as stating, “The sphere is made of special light alloy but very resistant, possibly a fuel tank or a part of a satellite! The object does not have any signs or marks that could identify its origin nor the country to which it belongs.”

Two views of the space sphere that fell in Mexico in 2008, now in the possession of Jaime Maussán. Notice the extensive damage inflicted due to reentry. (Credit: Open Minds Production)

The argument in favor of the extraterrestrial origin of these spheres made by some ufologists in Mexico and Argentina is that they are extremely hard, almost impossible to burn or cut. 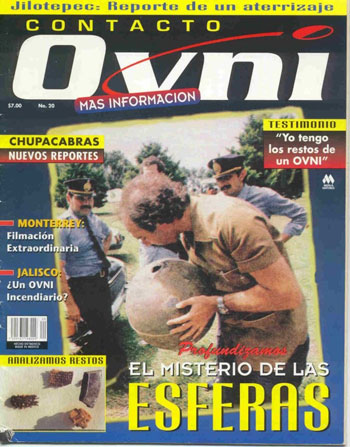 Cover of the Mexican magazine Contacto Ovni in the 1990s with the headline, 'The Mystery of the Spheres.' (Credit: Contacto Ovni)

But this is what you would expect of a fuel tank for a spacecraft, designed to be ejected for earth reentry once the fuel is used; it has to be made of metals able to withstand the space launch or the satellite or spacecraft could be in danger. Mexican engineer Luis Ruiz Noguez, a well-known UFO skeptic, explained that the alloy, which is composed of titanium, vanadium, and aluminum, shown in the 1994 and 1996 Mexican spheres “is chiefly utilized in the manufacture of fuel tanks for artificial satellites due to their high resistance to corrosion and temperature.” While the spheres at Argentina’s Visión OVNI Museum are exhibited as true UFO artifacts, the local Firmat Museum in Santa Fe, Argentina has a couple of similar spheres that the Russian space program has acknowledged as part of a Russian space probe.

If you still have any doubt about the provenance of these objects, checkout Paul Maley’s Space Debris website, to see images of a number of these “space balls” of varying sizes and conditions found around the world. These spheres provide a useful cautionary tale in learning how to distinguish prosaic man-made space objects from true unknown devices. There is a good possibility that many so-called UFO crashes have a terrestrial origin, but others are still enigmatic and so far unexplained.