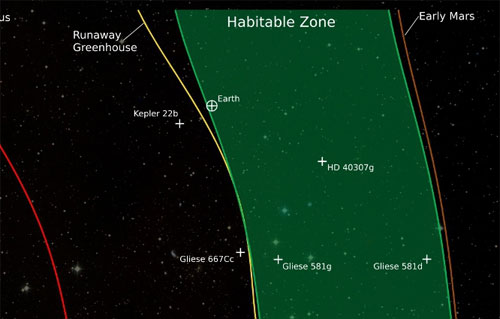 Astronomers at Penn State have redefined the habitable zone–the range around a star that is not too cold or too hot for liquid water to exist on a planet, making it potentially capable of sustaining life as we know it. 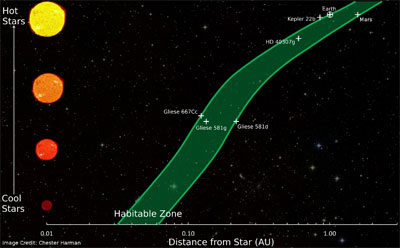 Building on the previous definition established by Penn State’s Dr. James Kasting, the Penn State Department of Geosciences team developed an updated model for determining whether planets fall within a star’s habitable zone. And in comparing the new model with the previous model, astronomers found that habitable zones are farther away from the stars than previously thought. Space.com explains:

The new definition of the habitable zone is based on updated atmospheric databases called HITRAN (high-resolution transmission molecular absorption) and HITEMP (high-temperature spectroscopic absorption parameters), which give the absorption parameters of water and carbon dioxide — two properties that strongly influence the atmospheres of exoplanets, determining whether those planets could host liquid water.

The new definition isn’t drastically different from the previous definition. But as astronomer Abel Méndez of the University of Puerto Rico at Arecibo explains to Space.com, “Many of those planets that we believe were inside are now outside. But on the other side, it extends the habitable zone’s outer edge, so a few planets that are farther away might fall inside the habitable zone now.” Méndez was not part of the team that redefined the habitable zone. But he does manage a list, called the Habitable Exoplanet Catalog, which contains all known potentially habitable exoplanets.