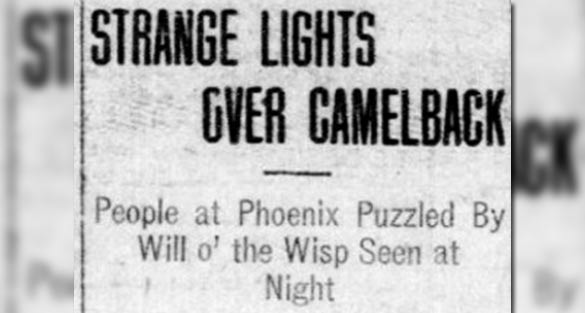 Ask any ufologist when strange lights were first seen by the residents of Phoenix and they wouldn’t hesitate to tell you it was somewhere around 8:30 pm on March 13, 1997. However, the correct answer might be earlier, by at least 88 years!

According to similar articles in the March 10, 1909 edition of the Arizona Republican and the March 18th edition of the Bisbee Daily Review, “strange lights” were seen over Camelback by Phoenix residents on March 9th. The light was described as being “about the size of a ten-cent piece held at arm’s length” and it “swayed to and fro and then remained stationary.”

“It was too high in the heavens to be the light from a fire on Camelback or one of the other peaks,” the newspapers reported. The light created quite a stir throughout the community and the time it first appeared and the duration of the sighting were carefully recorded as“14 minutes of 8, and blazed up for about 6 minutes.”

“Many varied theories were evoked” to try to explain this “peculiar light” and they ranged from bad to worse:

“One of the oldest inhabitants gave his opinion that the ball of fire held suspended between heaven and earth was a meteor or an asteroid that had become entangled, as it were, in the earth’s atmosphere, very much the same as a fly becomes enmeshed in the strands of a cobweb.”

Another bizarre explanation was described by the articles:

“The Star of Bethlehem theory had its supporters, but others argued that Bethlehem was not in that direction, and that the star, when it appeared, would not be seen perching on the top of Camelback.”

The Republican article offered more details and another wild theory:

“Others of the younger generation were of the opinion that it was the lantern of some marooned aeronaut who had anchored his sky boat to a cactus on account of the high wind.

“The attention of the police was called to the phenomenon and the entire force climbed to the top of the City Hall. The light was plainly visible but none of the learned ones could explain satisfactorily its presence.”

What an exciting night it must have been as Phoenix residents watched in amazement as this light “blazed” over Camelback, while the entire police force rushed to the top of City Hall! And how similar would the reaction of the inhabitants be 88 years later!?

While no explanation could be found for this mass sighting, not all newspaper reports of strange lights were as mystifying, although you wouldn’t know it from some accounts. The Bisbee Daily Review ran a short piece on September 7, 1909, describing “a strange light” in the western sky that had the “habit of appearing about 7 p.m. After that it drifts slowly away till it finally drops behind the White Tank mountains. The strange light has been doing this every night for the past week.”

The Arizona Republican ran a similar article, but also pointed out that Venus was a prominent feature in the western sky during this time, so the mystery was solved. Using the Stellarium program for Phoenix for early September 1911, I confirmed that Venus did appear in the western sky in the evening and set about an hour later in the vicinity of the White Tank mountains. 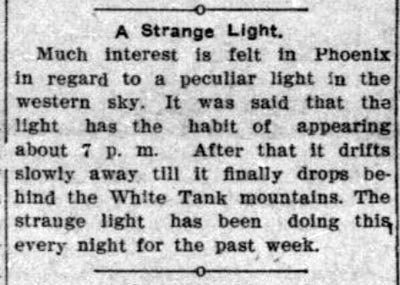 While these September sightings were resolved, another incident in April of 1911 defied explanation as a bright light appeared beneath the clouds for thirty minutes. In the April 16th edition of the Arizona Republican, the following appeared:

“A Strange Light—Many persons last night shortly before nine o’clock and until sometime after saw a curious light in the northwestern sky moving in that direction toward the horizon. It was in view about half an hour. The light was a bright one and seemed to move about like a searchlight. The only suggestion offered was that it was a dirigible balloon. A huge meteor at an immense distance would have apparently moved as slowly but the light could not have been a meteor for that part of the sky was obscured by light clouds at a great distance. The moving light was plainly this side of them.”

On November 15, 1918, the Arizona Republican featured an article with the headline, “Strange Search Light Illumines Country, Mystifies Credulous.” The article described a “strange searchlight of great power and penetration,” which “lighted the country east of Phoenix on Wednesday night. So strong were the rays of this strange light that they were thrown into windows of houses more than a mile away with such intensity that persons were enabled to read by the light.”

At the same time, “the electric lights were out in Phoenix” and the “street railway service was interrupted.” The official explanation for this blackout and the powerful searchlight, with which people could read over a mile away, was that “one of the wires of the high power transmission line in the Wilson district was burned in two, and the current was made to feed a powerful improvised searchlight.”

While not in the Phoenix area, and even earlier sighting was mentioned in the August 14, 1897 edition of The Argus: “A strange light was seen moving in the sky at Tombstone the other evening. It was visible for at least fifteen minutes. The airship theory has been revived.” 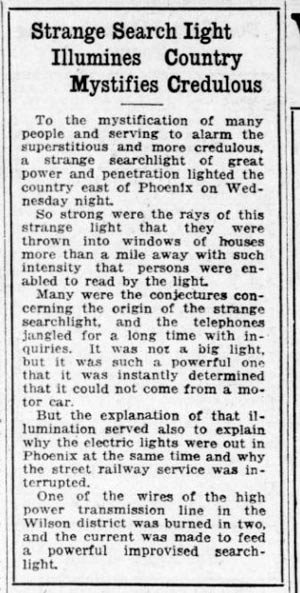 Of course, the years 1896-97 saw numerous mysterious airship sightings across the country. While many credible people saw these “airships,” the August 28th edition of The St. Johns Herald couldn’t resist poking fun at the witnesses by inferring that such sightings corresponded to lightning bug season.

What were these strange lights seen in 1909, 1911, and 1918? The year 1909 was an active one for sightings in the Hudson Valley of New York and New England, and indeed it was during my research into this wave of sightings that I came across these Phoenix cases. As no planes were yet flying at night or carrying lights, any conventional explanations would be limited to some type of balloon or dirigible. Further research would be needed to determine if anyone in the Phoenix area had any type of balloon or lighter-than-air craft that was equipped with a powerful searchlight and batteries, which would have been very heavy. It is not likely for that time period, but the possibility should be explored.

In the meantime, we may need to push back the timeline of the first appearance of the Phoenix Lights from 1997 to at least 1909, and continue the search for other such cases.