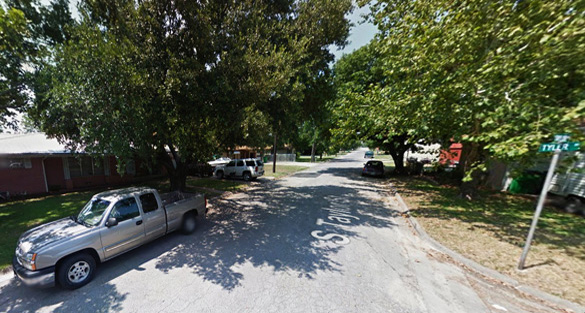 A Texas witness at Gainesville reported an “entire block filled with people” watched a large, triangle-shaped UFO that moved low over her neighborhood about 11 p.m. on June 26, 2014, according to testimony in Case 57403 from the Mutual UFO Network (MUFON) witness reporting database. 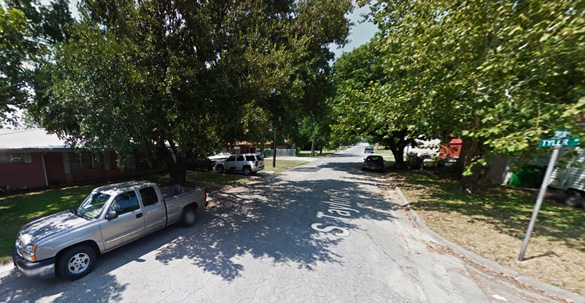 The witness said neighbors along Tyler Street in Gainesville, TX, pictured, were lined up in the street watching the large, triangle-shaped UFO on June 26, 2014. (Credit: Google Maps)

The witness was returning home from work and traveling along Tyler Street in Gainesville when she noticed the entire block filled with people looking up into the sky and talking about a UFO.

“Many took footage on cell phones,” the witness stated. “The lights were lined up horizontally, and then right before it disappeared, the lights instantly lined up vertically as if the object turned on its side and then sped away.”

The witness was driving home from work when the crowd of people in the street was noticed – all watching a UFO. Pictured: Tyler Street, Gainesville, TX. (Credit: Google)

The witness said the object was very large.

“Looked like a solid object larger than a plane. No feelings other than awe.”

Gainesville is a city in and the county seat of Cooke County, TX, population 16,002. 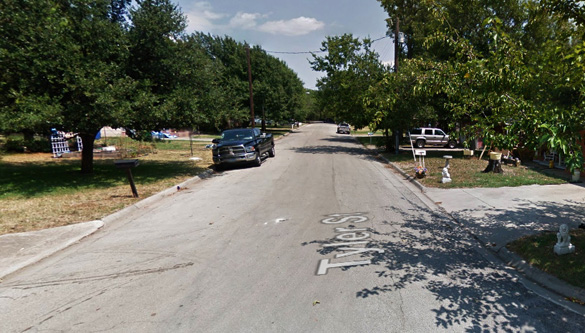 The witness stated that many people were taking photos of the low flying UFO, although no images were included with the MUFON report. Pictured: Tyler Street, Gainesville, TX. (Credit: Google)

Texas MUFON is investigating. Texas has a current UFO Alert Rating of 3 with a high number of recent reports nationally. Texas had 30 UFO reports in May 2014 – the 4th highest reporting state – while California had 102 reports as the highest reporting state. The above quotes were edited for clarity. Please report UFO activity to MUFON.com.

Correction: This story was originally posted with images from MUFON Case 57407 from Caldwell, NJ. No images were submitted by the witness in Gainesville. Our apologies for the mix-up.