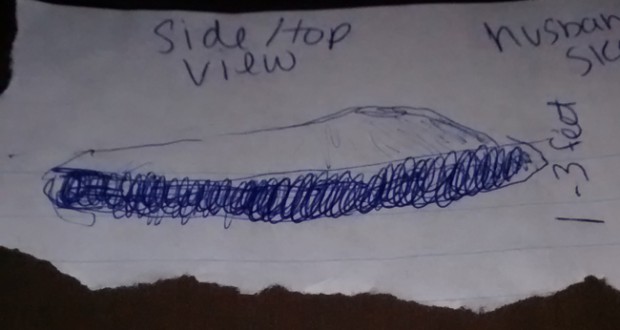 A Texas couple near Leon Valley and San Antonio reported watching a slow moving, silent, triangle-shaped object just 20 feet off of the ground that appeared to be partially transparent move behind their home and yard, according to testimony in Case 62530 from the Mutual UFO Network (MUFON) witness reporting database.

The reporting witness reveals the encounter from both her and her husband’s point of view. The two were outside having a cigarette at 11:45 p.m. on November 26, 2014, when the object first came into view.

“Me and my husband went out to the front yard by our trucks to smoke a last cigarette and my husband wanted to wait until midnight to wish me happy birthday,” the reporting witness stated. “We didn’t bring our phones with us because we weren’t planning on taking long.”

The husband first pointed out the object to his wife just as she was going to pass him a cigarette lighter.

“I turn around and see ‘it’ going through the top portion of the tree across the street and hovering about 20 feet low and it was going like 2 mph over us and into my backyard and house.” 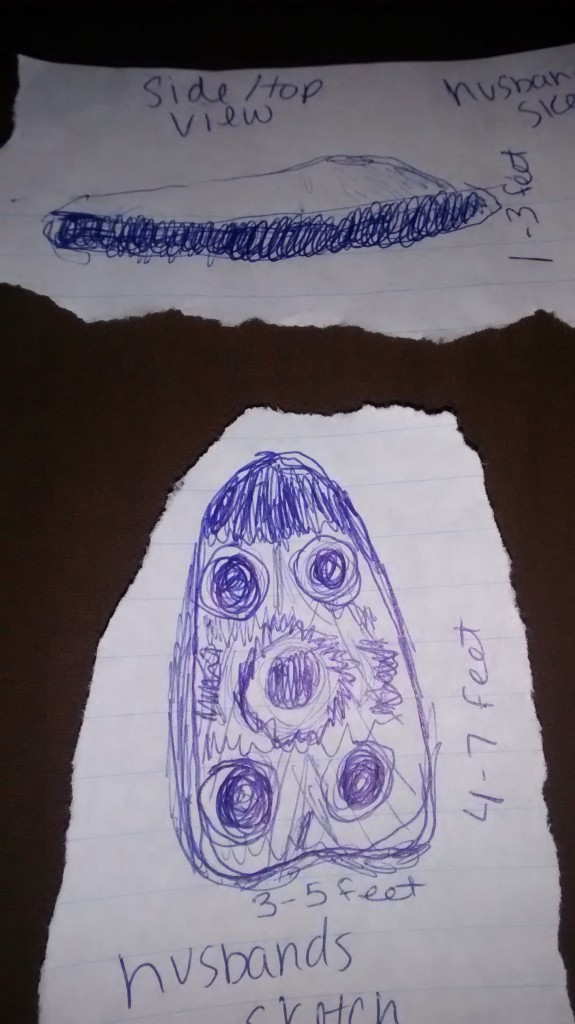 The husband’s illustration of the object. (Credit: MUFON)

The following is told from the wife’s point of view.

“In my opinion it had a shape like a Ouija hand piece with four ports/circles – and something in the middle of it between the ports? ‘It’ was made of some sort of metal material. I saw this from about 20-25 feet above me so I see the belly of this ‘thing.’”

But the scene had additional unusual details.

“The trippy thing about this was it was cloaked or transparent to me. In my opinion ‘it’ had a predator’s cloak/transparency, not totally invisible, like you can see some of it, but it was kind of blurry like summer’s heat haze. The main color to me was dull black/gray with some bronzish-like color, not bright at all. It had four port – two on each side – that color was reddish/orangish/yellowish – very dim glow to it with a defined black trimming around ports and there was something in the middle of ‘its’ center in between the ports?”

“’It’ looked like it was made out of one sheet of metal. There were no panels, rivets, sections, windows, fumes, smell. When I first saw this I couldn’t believe my eyes or brain. Me and my husband were frozen out of shock. All we could do is rotate around. I wanted to run to the middle of street to see if it sees me, but I couldn’t move. Then I wanted to throw the lighter at it to see if it makes a sound or see what its reaction was, but I was afraid that it would zap me or something.”

They watched the object move.

“We saw it go over us and behind my house and yard. My feelings to this were scared, nervous, curious, adrenaline, denial, reality shattered. My husband did not want to be involved with this report, so he gave me his POV and his sketch.” 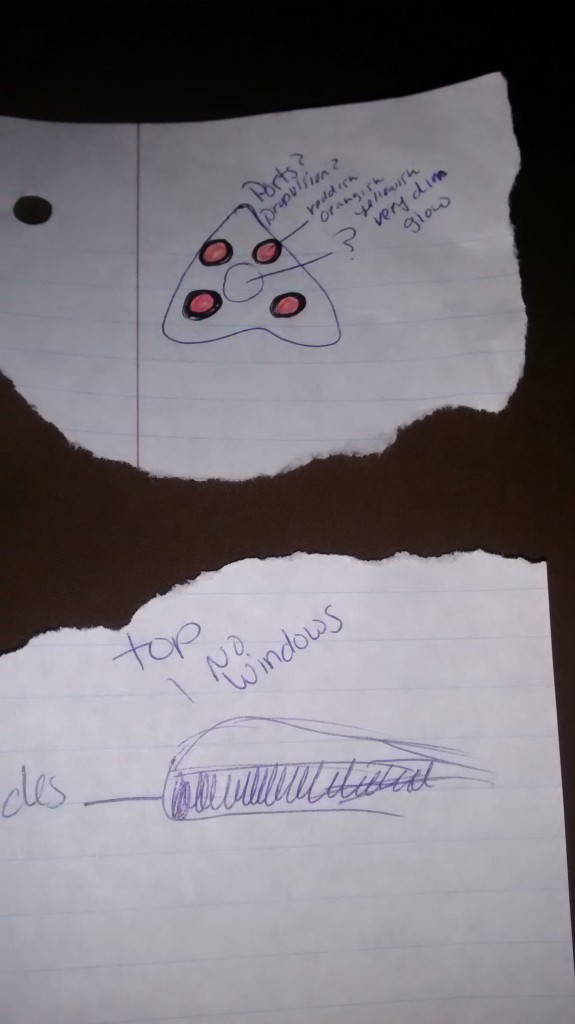 The wife’s illustration of the object. (Credit: MUFON)

The wife then explains what happened from her husband’s point of view.

“He was asking for a lighter when he heard some leaves fall across the street. That’s when he saw ‘it’ creep up in the top portion of the tree. It went through the tree’s top. His description of ‘it’: Color: flat black/gray, tan, reddish/orange. My husband says he doesn’t know if ‘it’ itself was organic. There were no smells or trails/vapors. In his opinion it had a moth-like body with wings closed upside down. To him ‘its’ transparency was like bee wing material I guess membrane-ish. He felt excited, nervous, shocked.”

The movement of nearby leaves caused her husband to look in the direction of the craft.

“If it wasn’t for him hearing the leaves fall I wonder if we would have noticed ‘it.’ After this happened, I had told him to just draw it – don’t talk. I wanted to make sure I wasn’t delusional. He drew his sketch. I drew mine. It was so eerie. I knew we had seen something.”

The couple then noticed other odd things happening in the immediate area.

“As we were reflecting back at what happened we notice a lot of weird things. First, we live in major city, one block away from a busy street and concrete plant and in the hood – there’s always some sort of sound. About 10 seconds before this happened, there was zero noise. No animal, traffic, environmental noise. The street light or house lights didn’t flicker or dim when this ‘thing’ went over us. The street light didn’t illuminate ‘it.’ And ‘it’ didn’t cast a shadow. It seemed to reflect light. It kind of seemed holographic.”

The next day they explored the area where the object had been seen.

“We went out the next morning to see if anything happened to the tree or street or house. Nothing happened – no broken/bent branches, nothing burnt. Not one trace of anything. Birds still gather there. We have no idea of where it went after that. We don’t know if it went through my backyard’s trees or the houses behind us. We just saw it go behind our house and yard.”

The two wonder about what exactly they saw.

“That is so freaky. Was something in there? Was there a purpose in being so low and slow? Did ‘it’ see us? Both of our concepts of reality are shattered. My husband never once doubted himself of what he saw. I’m sometimes in denial, but I know what I saw. It’s just hard for me to accept what happened and my mind permanently tattooed the event. How can this be? Will it come back? Now I’m constantly looking at the trees and sky. I don’t know if it will return. Please anybody have any info/experience please share with me?” 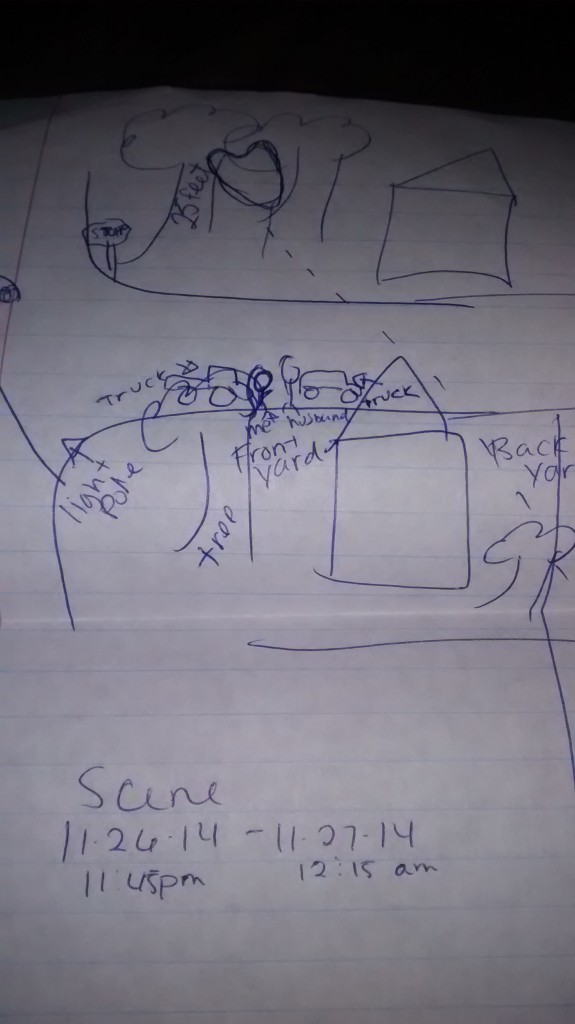 Illustration of the witness area where the object was seen. (Credit: MUFON)

Leon Valley is a city in Bexar County, Texas, that is an enclave on the northwest side of San Antonio and is part of the San Antonio-New Braunfels Metropolitan Statistical Area. The population is 10,151.