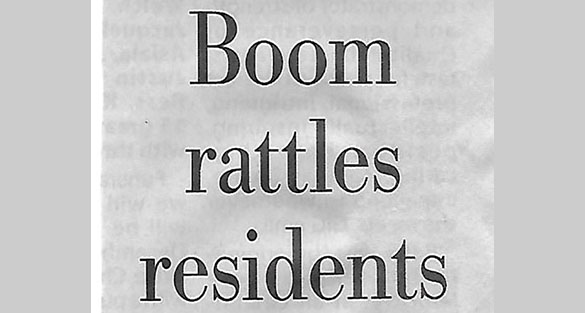 A Texas witness at Lake Jackson reported a loud rumbling sound “like thunder” that shook the house and was followed by an unusual whining sound, according to testimony in Case 80863 from the Mutual UFO Network (MUFON) witness reporting database.

The witness recounted what happened about midnight on December 6, 2016.

“We have a mystery, locally,” the witness stated.“About 12 midnight, many people felt/heard a boom and shaking. Some people reported that it was followed by a high-pitched whine. The area that seems to have gotten the worst effects was Lake Jackson, about 12 miles from us. Some people as far as Alvin (about 35 miles away northeast), and Brazos Bend State Park, (about 30 miles north) said they had experienced it also.”

‘The Facts’ newspaper covered the story. (Credit: The Facts)

The witness has been hearing from more and more people who had the same experience.

“More recently, someone said that it had been reported as far away as Cypress, (80 miles north), and Porter, TX, (81 miles northeast), although those are unsubstantiated and single reports, as opposed to the hundreds of people who have been blowing up local Facebook threads. Police have checked all local chemical plants, all possible companies that place explosions to map geologic stuff – nothing. No natural gas explosions in residential areas. No major fires. Our only local paper has a thread going on their website; no news of what might have caused it. One of the Houston news channels sent a reporter, and it was treated about as credibly as a Santa sighting. (country hicks imagined feeling stuff).”

The witness believes that the incident is being treated as a mass delusion.

“Hundreds of people in the area, especially in Lake Jackson, felt their houses shake, and heard a loud rumble like thunder, although skies were clear. A friend in Detroit, TX, about 350 miles north, read my post on Facebook, and said that at about 11:30 a.m. she had heard a loud and odd rumble of thunder, and even brought it to her husband’s attention. They, also, were under clear skies.” 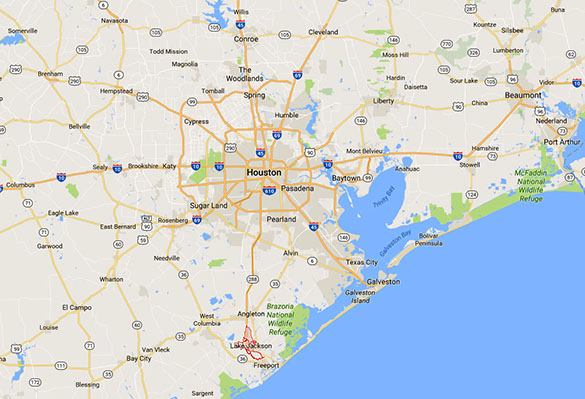 At least 100 witnesses at or near Lake Jackson, TX, heard a mysterious boom sound that shook homes on December 6, 2016. (Credit: Google)

Texas MUFON State Section Director Charles Stansburge investigated this case and closed it as an Unknown.

“To really get some information about what happened, I made it my duty to go to Lake Jackson and find out what I could,” Stansburge wrote in his report. “I contacted the Clute Police Department and the dispatcher said that she did not hear the boom because she was out of town. I did contact a couple of other officers and three of them that I had talked to claim they may have heard it, but they had no idea what it was and they also said that they made phone calls and to all the big companies such as BASF Corporation, Dow Chemical Company, OLIN, Phillips 66 and Chevron Phillips in the area.

“I contacted Lake Jackson Police Department and one of the officers that was there brought me into the room and we talked about what took place. I asked him if he heard the noise, and he said no, but that we did get a lot of reports coming in from people saying that their houses were even shaking because of the boom.  I asked him if he knows how many that had reported it and he stated about 75 that he knew of.”

The investigator also polled people in the street – and found an additional approximately 40 new witnesses. He also described the immediate area.

“The location is one big city, Lake Jackson, with a couple other smaller towns around it.  There are railroad tracks, lots of housing and businesses, police departments, sheriff’s office, schools and multiple plants such as Dow Chemical, Phillips 66 and Chevron Phillips and others. Also a few lakes and they are not far from the Gulf of Mexico.” 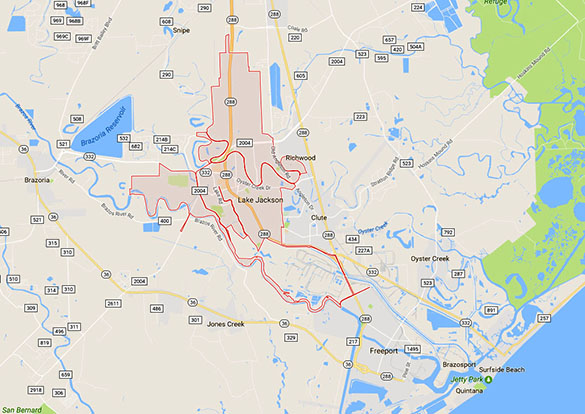 The reporting witness is from Lake Jackson, TX. (Credit: Google)

“There is no real evidence of anything other than a big boom. From here I went ahead and got the phone numbers of the different plants and made a phone call and asked them what they thought it might be or if they had any problems with their planet. Every one of them said that they had no explosions and no problems with anything. They all also said that they kept the plants operational and did some investigation on their own throughout the plants and found nothing.

“I also contacted the National Weather Service and asked them about the atmosphere if that was a boom from an exploding meteorite or was it something else. They claim that they have no idea what it was other than maybe a possible meteorite in the atmosphere and it exploded, but they claim they have no information of that from anywhere. I also talked to them about any earthquakes and they claim no earthquakes anywhere around the area or even in the state or surrounding states and they are just as baffled about it as anyone.

“The others I have contacted said that other people have told them about different cities. One of those was Katie, Texas, and the police department claims they had no reports about any kind of a boom. Sugarland Police Department also claims no calls from anybody and claimed not to hear any kind of big boom.  I called the Sheriff’s Office and asked about any calls of this big boom and they sent me to records and the person in records claims they had calls from citizens but she did not hear herself being inside the building.  I also contacted Rosenberg Police Department and I talked to dispatch and they don’t remember having anybody call in and I asked for records and she said they were closed right now – but you can call back on Monday. I called back on Monday and records claims there were people that had called in about the boom.

“I also contacted Alvin P D, Ellington Field, Harris County Sheriff’s Office, Huston Police Department, and these were the ones that claim no calls. The city of Brazoria claim they had a few people call in. Also the Brazos Bend State Park also had people that were out in the park and Rangers as well that had heard the big boom.

“I contacted the Clute newspaper which is called The Facts and they went ahead and gave me a copy of the paper with the article in it.

“At the time of the big boom, which was on the 6th of December, I was sitting at my computer at about 12 to 12:15 and heard a big bang and couldn’t figure it out. I even went outside to check. I did not see any smoke anywhere and had no idea what it was.

“No other cases of the big boom have been reported to our database.

“The case is completed as an Unknown with at least 100 or more people witnessing hearing this big boom with some homes shaking. As far as my conclusion is, that I don’t know what it is or what was it could have been, perhaps an atmospheric explosion of a meteorite, but nobody knows what it was.”