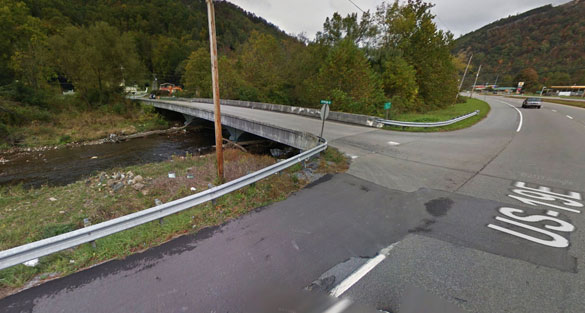 A Tennessee witness at Hampton recalls a 1958 encounter with a UFO when a “large, metallic, circular craft” moved slowly near a mountain area less than 1,000 feet off of the ground, according to testimony in Case 65719 from the Mutual UFO Network (MUFON) witness reporting database.

The witness is not certain of the exact date, but thinks the events occurred as a freshman or sophomore in high school about 1958. 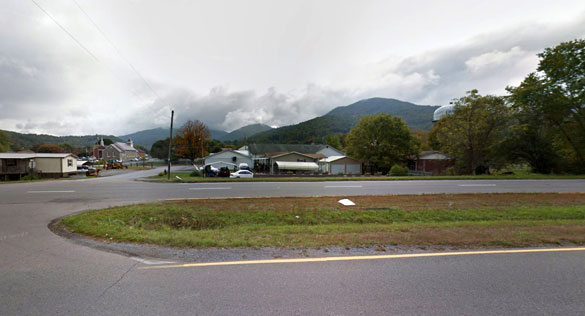 Looking east in 1958 from what is now the Railroad Street and Rittertown Road intersection in the small town of Hampton, TN, the witnesses saw a disc-shaped craft. Pictured: Looking east today from the intersection. (Credit: Google Maps)

“It was late afternoon, with plenty of light and a few clouds,” the witness stated. “My cousin and I were sitting in the yard watching traffic on the small, narrow country road at the corner of what is now Railroad Street and Rittertown Road in the small town of Hampton, Tennessee.”

The two were looking east when the cousin asked, “What is that?”

“I looked up and saw a very large, circular craft maybe 1,000 feet or maybe a little more off the ground descending in a slant from right to left. It disappeared behind a large mountain to the left.”

“It was so large it was probably one third as large as the mountain. It was gray or silver in color and had a shape similar to a round aspirin tablet with a side. We could see a little of the bottom side as well as the top. It did not make any sound nor do I remember any lights in the daylight. There was no smoke trail behind it. It was below the clouds so our vision was not impeded by any means.” 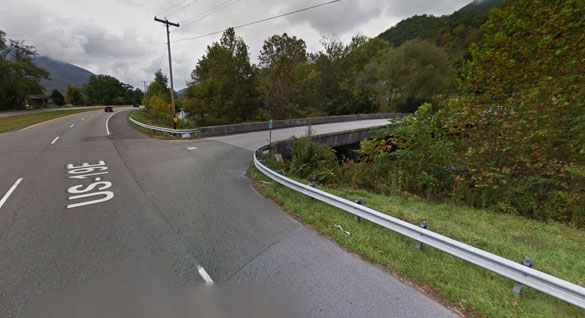 The witness described the object as one third as large as the nearby mountain, gray or silver in color and had a shape similar to a round aspirin tablet. Pictured: The intersection today at Railroad Street and Rittertown Road in Hampton, TN. (Credit: Google Maps)

The witness wonders what the object could have been.

“It was obviously a metal flying craft of a kind that doesn’t even exist today, let alone in the 1950s.”

“When I went to high school the next day several people from our little town talked about seeing it also. A story circulated that the newspaper in Bristol, TN, had published a story the next day about a craft crashing in the mountains near there. The rumor was that several people went into the woods to investigate and smelled something like sulfur in the air and someone reported seeing a little man in a tree. This last part is only rumor but maybe there was a report in the paper. Bristol, TN, is in the exact direction the craft was headed when we last saw it.”

The witness is hoping that perhaps there was newspaper coverage that could be researched today, or more witnesses that might come forward.

“I have never forgotten the incident and wondered if anyone else who saw it has reported it to UFO investigators and if any investigation was ever completed. Would sure like to hear of anything that was or is found.” 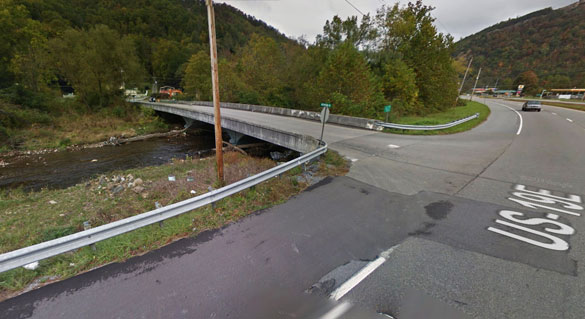 Additional witnesses turned up the next day in town with rumors that a newspaper in nearby Bristol, TN, had written about the event. Pictured: The intersection today at Railroad Street and Rittertown Road in Hampton, TN. (Credit: Google Maps)

Hampton is an unincorporated community in Carter County, Tennessee. Please remember that most UFO sighting can be explained as something natural or man-made. The above quotes were edited for clarity. Please report UFO activity to MUFON.com.