Michael Bay is a veteran ET-theme filmmaker, widely known for his Transformers movie franchise–movies about robot extraterrestrials. He also produced the 2011 film I am Number Four, about a group of teen extraterrestrials who flee to Earth to escape a pursuing predator. But while Bay’s depiction of extraterrestrials has generally been better than the Hollywood norm (i.e. Hollywood films involving extraterrestrials typically depict all ETs as hostile bad guys), his latest ET-themed project is sure to upset more than a few people, even though it will feature benevolent extraterrestrials. 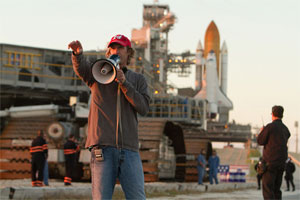 Bay made this announcement last week at Jazz at Lincoln Center in New York during Nickelodeon’s annual Upfront presentation, where he treated the audience to an exclusive look at 3D storyboards for the upcoming live-action movie. According to Gothamist, Bay provided the following statement about the movie:

By making the Turtles extraterrestrials, Bay is completely rewriting the established origin of these characters. As Entertainment Weekly explains, “In the original mythology, four baby turtles fall into the sewer and come into contact with glowing radioactive ooze, which mutates them into four bad-ass warriors trained in ninjutsu by astute rodent Splinter.”

This wild plot change is sure to upset diehard fans of the original storyline. It is also yet another example of Hollywood catering to the public’s insatiable interest in UFOs and extraterrestrials.