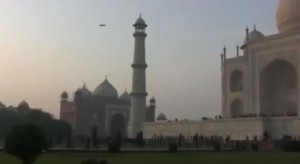 The bug theory is plausible if the video was shot from behind a window. Some suggest the odd, glitchy movement of the UFO at the beginning of the video is an indication that the object was added to the video digitally. This object is notably sharper and more in focus than anything else in the video, indicating that it is either very close to the lens (like a bug), or it was added digitally.

Regardless of what the video shows in the sky near the Taj Mahal, the Inquisitr‘s inclusion of this video in an article about a recent wave of UFO sightings by the Indian army is misleading and unfortunate. Aside from its title, the Inquisitr article makes no mention of the Taj Mahal UFO video. But this confusing combination led to an MSN article with the subtitle, “Did Indian troops see a UFO above the Taj Mahal?” Although the MSN article mostly understood that the two have nothing to do with each other, it’s unfortunate to see that, and other stories, grouping this mundane (and potentially hoaxed) video with a fascinating UFO sighting case involving military personnel. 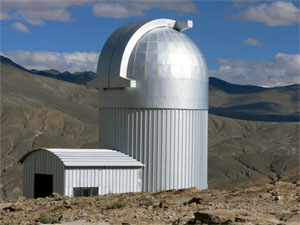 Back in November 2012, members of the Indian Army and the Indo-Tibetan Border Police Force reported seeing more than one-hundred UFOs along India’s border with China during the span of two-and-a-half months. Conflicting reports by various media outlets continue to emerge related to this ongoing case. Most recently, some outlets asserted that the country’s defense minister denies the UFO reports. But astronomers and the military witnessed these objects themselves and conducted investigations in an attempt to identify the UFOs.

Several news outlets reported that astronomers concluded the UFOs were simply Jupiter and Venus. But again, these UFOs were observed and investigated by a team of astronomers from the Indian Astronomical Observatory who concluded that the objects were “non celestial,” ruling out meteors and planets. Additionally, the Telegraph reported that Dr. P. Sreekumar, the new director of the Indian Institute of Astrophysics in Bangalore, recently confirmed that the institute is still investigating the UFOs along the border. He stated, “We’re still looking at these issues. We have a facility [to investigate issues like these] and it is important that we look at it. As an institute we can’t say what it is right now. It’s very fresh.”

The many twists and turns and conflicting reporting with this case make it difficult enough to follow without articles like the one published by the Inquisitr adding more confusion.