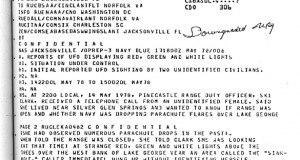 The U.S. Air Force's (USAF) official investigation into UFOs ended in 1969, and since then, the military has claimed they have no interest in the topic, nor do they investigate UFOs. However, through the Freedom of Information Act (FOIA), investigators have uncovered several documents that would indicate UFOs have been of interest, and that the most important files were most likely never made public.