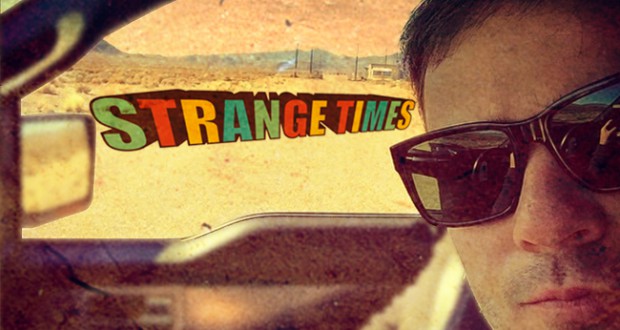 Many know that accomplished musician and businessman Tom DeLonge has a strong interest in UFOs and other mysteries. The veteran UFO researcher has invested more than twenty years into researching and investigating the UFO phenomenon.

In 2011, DeLonge and his band Angels & Airwaves launched Strange Times, a website that featured UFO and other news not typically reported by mainstream media, including news by Open Minds. But this site went offline late in 2012. When Maureen Elsberry and I interviewed DeLonge on our Open Minds web series Spacing Out! in December 2012, he explained that the site was in a “holding pattern.” But he alluded to new ideas and a new direction for his Strange Times project.

In addition to keeping busy with his band Blink-182 and his shoe company Macbeth, DeLonge has been working tirelessly on the upcoming Angels & Airwaves album that compliments an animated short film titled Poet Anderson: The Dream Walker. But DeLonge hasn’t forgotten about Strange Times. Fortunately, recent clues suggest that Strange Times is actually getting closer to relaunching.

On November 5, DeLonge posted a video to his Instagram account that was shot during a recent trip to the area around Nevada’s top-secret Area 51 facility. He included in the video’s caption, “For those who think I’m only working on Poet…. You better get ready for Strange Times.”

This is above the secret Nevada test site. Hundreds of square miles of many secret bases. Some CIA, some Air Force and some unknown. We had to drive eight hours out of civilization and then another 25 miles on a dirt road to find this hill that overlooks the area. It lit up at night with night vision goggles. About 30 bases glowing in the distance. Not to be seen without the proper equipment. It was cold, really cold. The wind blew about 40 or 50 miles an hour. If our car did not start the next morning, we might not be here to talk about it. What an incredible adventure. For those who think I'm only working on Poet…. You better get ready for Strange Times.

He also posted a photo that shows the back gate of Area 51 in the background.

Exactly what DeLonge has planned for the revamped Strange Times is still unknown. But, based on the clues so far, it’s looking like the project will be much more interesting than a simple news website.