Spiral UFO over the Middle East 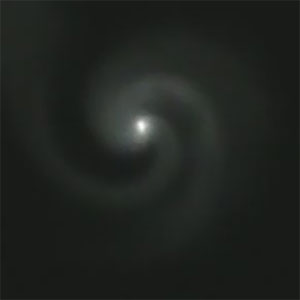 A UFO appeared in the sky above the Middle East on June 7, 2012. The strange object was seen by witnesses in multiple countries including Israel, Syria, Lebanon, Turkey, and Iran. Many witnesses recorded video of the UFO that, as Universe Today described, “started out looking somewhat like a comet and then started spiraling.”

MSNBC reports that Isreali police lines were jammed by hundreds of witnesses calling to report the UFO. The object’s strange appearance led many to conclude it was an alien spacecraft entering some sort of wormhole or time portal. But according to Universe Today, “The strange sight has been confirmed to be a Russian ballistic missile test of the Topol ICBM from the Kapustin Yar firing range near Astrakhan in southern Russia.” And space analyst Jim Oberg told MSNBC that the Topol’s “third-stage spin is a ‘feature,’ not a malfunction, and may be associated with guidance, or decoy deploy, or enhancing hardness against U.S. boost-phase antimissile weapons.”

What do you think? Do you agree that the object in this video was a Russian ICBM, or do you think it was something completely different? Share your opinion with us on the Open Minds Facebook page.