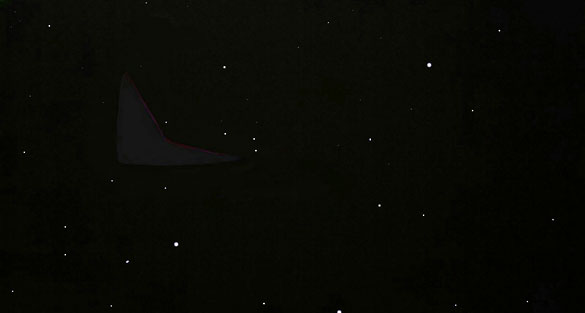 Triangle UFOs continue as one of the most-reported UFO shapes as filed with the Mutual UFO Network (MUFON) witness reporting database. A scan of the past six months – August 1, 2015 – January 31, 2016, shows 450 triangle reports worldwide. 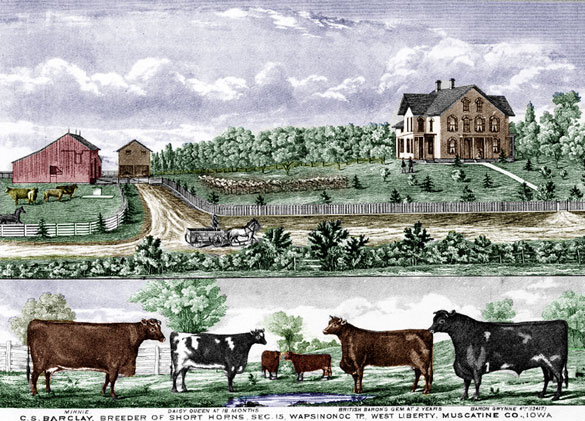 Statistically it’s more important that Iowa has 6 cases to the 8 Texas cases during this time period. (Credit: Wikimedia Commons)

Now looking at just the U.S. 84 cases – they were filed from 32 states ranging from 1 to 8 cases per state. The totals were typical where more cases were reported from the higher-populated states. So Texas has 8 of those cases; Missouri, California and Ohio each have 7 cases; and Pennsylvania had 6 cases.

But one state stood out from the list – Iowa with 5 cases.

Comparing populations – Texas has 26.9 million people versus Iowa with 3.1 million. Statistically it’s more important that Iowa has 6 cases to the 8 Texas cases during this time period. The following is a review of those 6 Iowa cases.

An Iowa witness at Marengo reported watching a 75-foot-long, triangle-shaped UFO hovering 75 feet over a local cornfield, according to testimony in Case 69105.

The reporting witness was a passenger in a friend’s vehicle as they drove into Marengo about 10:20 p.m. on June 4, 2015, traveling north and approaching Highway 6 when they first saw “an extremely bright, glowing stationary” blue-white light in the western sky.

The two discussed what they thought the object was – including planes or towers – but soon drove closer to the object.

“We reached U.S. Highway 6, stopped at stop sign, and turned left (west) onto Highway 6 towards Marengo, and towards the object,” the witness stated. “It’s four miles to Marengo and our turn into town, going north, at the Ampride Gas Station.”

As the two drove, they rolled down the vehicle windows, slowed down to about 45mph, and never took their eyes off the hovering light.

“As we neared the object, it stayed stationary, approximately 25 feet off the highway from us, hovering over a cornfield which had not been planted yet – about 75 feet in the air. The object was triangular in shape, a solid black color, with crisscrossing, almost fluorescent-looking, bar-shaped lights all across the bottom of the entire craft, mainly white and bright blue.”

The two were in absolute shock. They turned right, off the highway and headed into town.

“We instead turned around in the Ampride drive to keep observing it. Just as we did that and were going to go back the way we came to keep watching it, it suddenly started moving slowly east. It looked huge, and it was just gone.”

They began driving into Marengo and turned to the right, looking east, to see if they could spot it.

“It was hovering four miles away near the highway intersection, exactly where we had turned west onto Highway 6. It went four miles in approximately two seconds.”

Marengo is a town in and the county seat of Iowa County, Iowa, population 2,528. Iowa MUFON Field Investigator David Kreiter and Assistant State Director Beverly Trout investigated and closed this case as an Unknown. 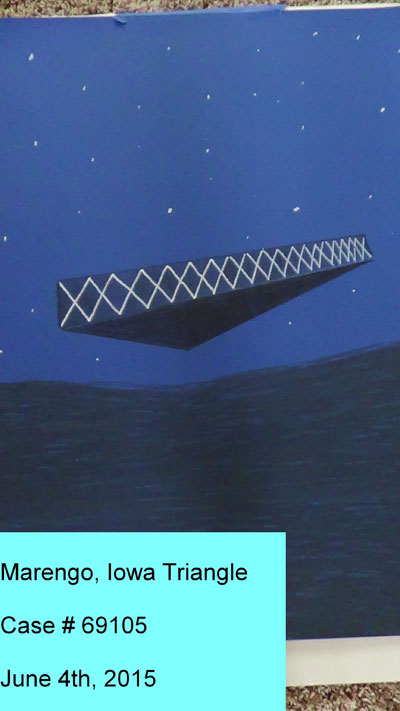 An Iowa witness at Altoona reported watching two objects the size of the moon that traveled 60 degrees across the horizon in one minute apart from each other in just three seconds, according to testimony in Case 68745.

The incident occurred at 9:10 p.m. on August 21, 2015, as the witness stood on a second story deck looking northeast and watched an airplane moving west to east. Assistant State Director Beverly Trout provides the narrative from the witness taken just minutes after the sighting.

“He then noticed a red mist-like object below the plane’s elevation, which was the apparent size of a full moon at 38-degrees elevation speeding from southeast to northwest. As it traveled, the object seemed to PHASE into red dots, and then midway in the 60-degree transit, was perceived as a transparent/translucent triangle with red lights, all of this taking place within an estimated three seconds.”

Altoona is a city in Polk County, Iowa, population 14,541. Trout closed the case as an Unknown.

An Iowa witness at Sioux City reported reported driving directly under a triangle-shaped UFO, according to testimony in Case 70578.

The witness was heading home southbound along Highway 75 at 8:06 p.m. on September 17, 2015, and noticed five lights in the sky before the Gordon Drive bridge.

“I thought, oh a helicopter,” the witness stated.

But the witness soon realized the object was larger than a plane in the sky.

“As I was going almost under bridge I was able to see under it. There was no other lights than the five in a straight line. It was shaped like a triangle. When I got out from under the bridge I had to double check what I saw. It was seriously bigger than an airplane. When I turned east, it disappeared.”

Sioux City is a city in Woodbury and Plymouth counties, population 82,684. Iowa MUFON State Director Gregory Anderson investigated this case and closed it as an Unknown.

An Iowa witness at Britt reported watching as many as 14 triangle UFOs hovering over a rural area during the Blood Moon beginning about 9:30 p.m. on September 27, 2015, according to testimony in Case 71566.

The reporting witness was visiting friends in Britt to watch the Blood Moon and was outside with a group of people along the northwest edge of town with open farm fiends to the north and west and the town to the east and south.

“Before the moon was almost completed covered, I noticed several flashes of light in front of the moon that resembled flashes from cameras going off at the same time,” the witness stated.“A few seconds later an object appeared from the east (which is the same direction we were looking at the moon). It was heading right for us and was approximately 100 yards above the tree tops. It didn’t look like an airplane. For one thing it was absolutely silent. As it approached us we could see that it was triangular in shape with several white lights on the edge with one red and one green light flashing.”

But the group soon saw another UFO.

Then a third UFO appeared.

“A third triangular UFO appeared from nowhere in the east and moved over Britt until it reached the hovering first object. Once it reached the first object, it hovered in place about 100 yards above the first object. The two objects hovered close to each other for awhile until the first object finally began moving to the west and eventually floated out of sight. The second object that was hovering 5-6 miles in the northeast part of town was joined by a fourth triangular object that showed up from nowhere and hovered near the second object. Between 9:30 p.m. and 2a.m. we counted at least 14 triangular UFOs appearing and hovering over and around Britt.”

The group also noted that they were unable to take photos of the UFOs.

“Only the fainter stars showed up – but the UFO didn’t.”

An Iowa witness at Cedar Falls reported watching a triangle-shaped UFO that appeared translucent as it crossed the sky, according to testimony in Case 72695. 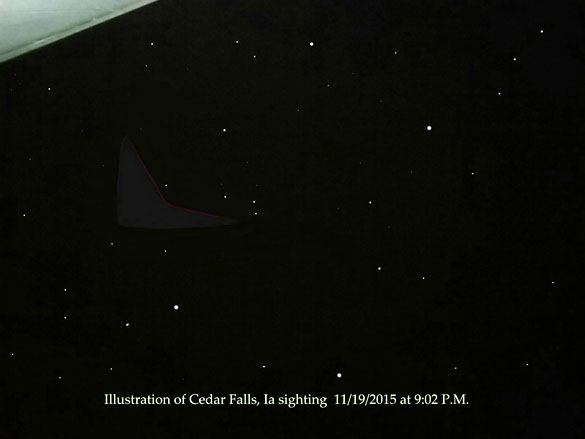 “Went out to have a smoke and noticed a movement to my right peripheral side vision in the star-filled sky,” the witness stated. “Saw what appeared as a fuzzy outline of a V-formation or triangle craft directly above. Hard to discern it as it appeared slightly lighter than the dark background sky, fuzzy edges with a translucent appearance. Very difficult to see unless looking right at it. No lights, no sound and its glide path was to the south-southeast.”

The witness watched the object for 5-6 seconds before it faded from view.

“Speed looked like around 200 mph at say 3,000 feet altitude. Just a guess though as I could not tell its size. When first overhead it would have been the size of my hand at arm’s length. Object did not reflect from the moon that evening and for a lack of better words, and appeared to cloak itself somehow to the background.”

The witness had a cell phone but stated that there was not enough time to snap a photo.’

“I am knowledgeable in earth sciences and known aircraft and consider myself an amateur astronomer. It matched the dark sky so much, I doubt a photo would have shown it unless during the day. This object flew silently down/above main street in a city of 40,000 + citizens. Another UFO sighting page shows the same object about 20 minutes before in the community of Ames – approximately 70 miles away on the same evening. This at least gives my report a little more substance.”

Cedar Falls is a city in Black Hawk County, Iowa. Investigators Steve Junge and David Kreiter investigated and closed this case as an Unknown.