Home / Articles / UFO News / SpaceX delays launch to space station
The launch of SpaceX's dragon capsule to the ISS has been delayed for at least a week.

Private space company SpaceX was scheduled to launch its Dragon capsule next week aboard a Falcon 9 rocket to rendezvous with the International Space Station (ISS). But the launch has been delayed for at least a week. 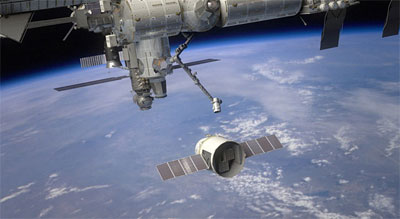 SpaceX is attempting to launch its unmanned Dragon spacecraft from Florida, sending it on a 21-day mission to the ISS. As Forbes explains, if the mission is successful, “it will mark the first time a private spacecraft has docked with the International Space Station.”

NASA has transport contracts with SpaceX, among other private space companies. Space.com explains, “SpaceX is developing Dragon and Falcon 9 to carry cargo under NASA’s Commercial Orbital Transportation Services (COTS) program, which aims to use commercial space taxis to replace the supply delivery services of the retired space shuttles.”

The Dragon capsule is designed to carry humans, and manned flights to the ISS via Dragon are estimated to begin in three years, but Musk and SpaceX have their sights set higher than the ISS. Musk has repeatedly stated his intention of going to Mars. In a recent interview with Forbes, Musk explained, “I’m okay with going to the moon, but we’ve seen that movie before and remakes are never as good. It would be more significant to have a base on the Moon, rather than just going back.”

The recent launch delay is unfortunate, but it is only a minor setback for a visionary company leading the private space charge.