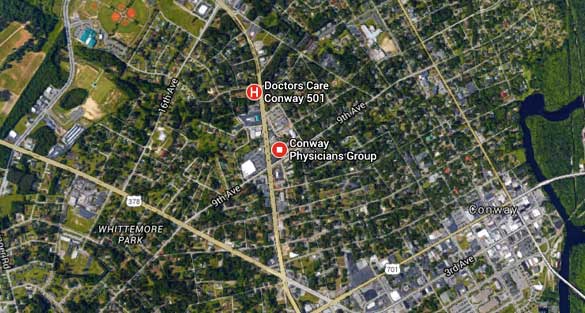 A South Carolina witness driving northbound along route 501 from Myrtle Beach into Conway reported following an unusually bright object in the sky that turned out to be a dark gray, triangle-shaped UFO, according to testimony in Case 66358 from the Mutual UFO Network (MUFON) witness reporting database.

“I was passing the Conway hospital on my left and I could see this strange, bright golden star,” the witness stated. “It just looked like a gold light in the sky. It is not super big, but it somehow caught my attention.”

The witness was curious as the object could not be identified.

“I figured it was just a plane or something at first, but it did not move in the sky really as I was driving down the road. So I just kept watching it to figure it out because it was getting noticeably larger after a minute or so of driving.” 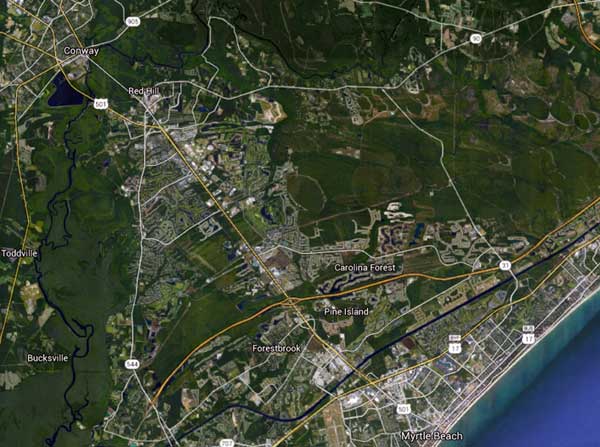 The witness was driving northbound along Route 501 from Myrtle Beach to Conway when the object was first seen. (Credit: Google Maps)

The witnesses’ curiosity took over and he began to follow the object.

“I took the exit for 501 business and was approaching the wooded forest right beside the Conway bridge and I could tell that I was close to the light. I cruised along slowly trying to see the light through the tree line. About three-quarters of the way down the wooded road before the bridge I came up even with the light and for a couple seconds I could see the source.”

“I saw this triangular metal object in the sky. The object was darker gray in color from what I could tell, and there may have been a little texture on the bottom of the object as well. I mainly mean that the bottom did not look completely smooth. It was unmoving to me the whole time I saw the object, but I was too far away to perceive smaller movements for most of the event.”

The witness described the object’s light.

“I saw placed around this object’s edge three colors of lights – yellow, white, and red. They were not blinking. At first I thought it was a radio or cell tower, but then I saw no supporting structures near the object and did not know what was going on.”

The witness lost sight of the object for a few seconds.

“I was freaking out a little bit, but I wanted to be very sure I was not just seeing something like a tower. So I turned right down State Road S 26-14 to see what was going on. I lost sight of the object after passing it, and then a few seconds later I made the turn. I drove slowly looking for any sign of any lights or man-made structures. I drove down the whole road and I saw no lights. I figured it could be just the road I was on that kept me from seeing any lights even though I should have had a better view of them. I proceed to drive back towards Myrtle Beach on 501 for a little bit so that I can come back the same way and I could see the light from where I already saw it. Whenever I turned around just before the Olivers on 501 business, I could not see the light that I had seen before.” 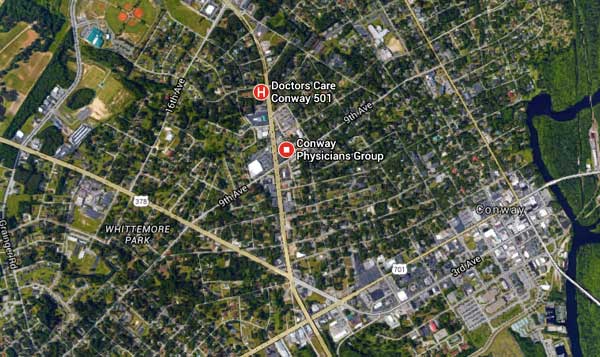 The witness took the exit for 501 business and was approaching the wooded forest right beside the Conway bridge to get a better look at the object. (Credit: Google Maps)

The witness became upset at this point.

“While I’m driving back towards the bridge I kept scanning the sky for any sign of what I had witnessed earlier. I saw nothing, I drove over into downtown Conway and I turned around so I could be on top of the bridge and look back towards the tree line where I was originally seeing the object. There was still nothing that I saw, so I drove for a bit, turned around, and went home. It was a clear night sky. It was around mid 70s Fahrenheit. Not very much wind.”

We recently reported on a South Carolina witness at Murrells Inlet who reported watching three black triangle UFOs gliding silently over her home heading toward Myrtle Beach about 9 p.m. on January 20, 2015, in Witness says three UFOs glided silently over house.

Conway is a city in Horry County, South Carolina, population 16,317. Please remember that most UFO sightings can be explained as something natural or man-made. The above quotes were edited for clarity. Please report UFO activity to MUFON.com.