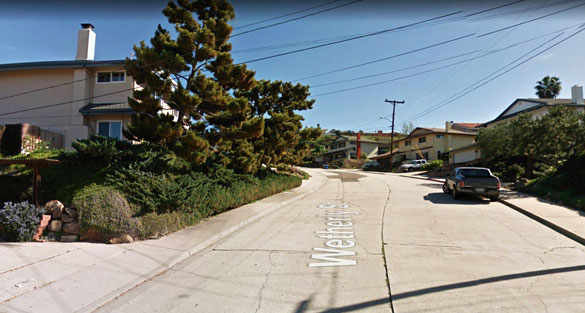 A California witness at La Mesa reported watching a triangle-shaped object silently moving overhead with white lights at its three points, according to testimony in Case 85310 from the Mutual UFO Network (MUFON) witness reporting database. 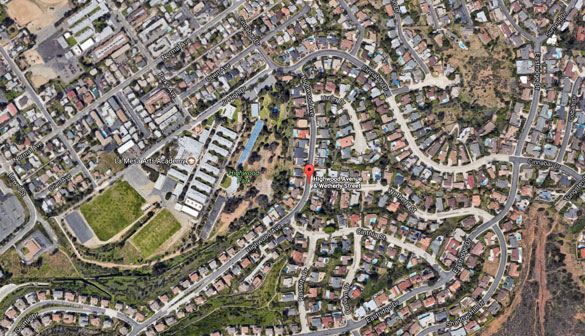 “My transportation van was in the shop for servicing and I was using a motorized wheelchair,” the witness stated. “My daughter and son-in-law accompanied me in my daughter’s truck and were playing leapfrog to make sure that I had no difficulty because of the darkness. There were no streetlights in the area. I was using a strobe headlamp so that oncoming vehicles could see me.”

There was no sound coming from the craft. Pictured: Wetherly Street in La Mesa, California. (Credit: Google)

The witness then noticed lights in the sky.

“As I turned from Highwood Street onto Wetherly Street, I became aware of the flashing white light approximately 50 yards behind and above me and there was absolutely no sound. I live in the area within the flight path of commercial aircraft approaching landing at Lindbergh Field in San Diego.”

The witness at first thought the lights were landing lights of a commercial jet, but noticed there were no navigation lights; just three, white lights blinking at the same time. I assumed they were navigation lights, but the craft was too low to have been a commercial aircraft and the was no sound. I am quite familiar with jet engine, helicopter, and reciprocating engine sound and noise.” 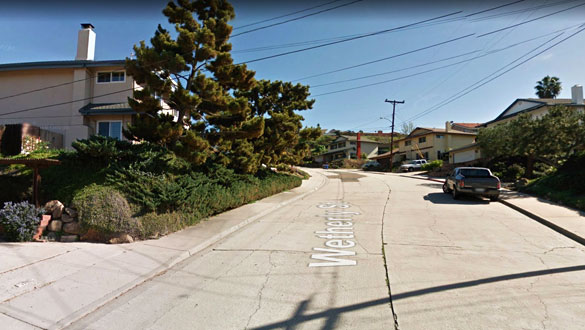 Because there was no sound, the witness took notice.

“There were no sound of any kind, human, animal or any type of aircraft. The craft was now directly overhead, but it was so dark I could not make out any shape except for the three lights which appeared to be at the points of a triangle. The craft was moving only slightly faster than I. I increased my speed as much as possible and continued up Wetherly Street. The craft continued above me and moved slightly faster. I estimate I was moving in about 5 to 8 mph.”

The witness then stopped a second time to listen for any sounds.

“There were none. As I approach my driveway, my daughter had moved her car onto the driveway and she and her husband got out. I have a motion sensor light in the driveway which came on at that point. In a normal voice, I asked my son-in-law and my daughter if they had heard anything. They both said no. Everything was silent in the craft and it continued in an easterly direction and disappeared behind some trees in my neighbor’s yard. I called the La Mesa police who were unable to verify any sightings by their personnel.”

La Mesa is a city in Southern California, located 9 miles east of downtown San Diego in San Diego County, population 57,065. California MUFON Field Investigator Gary Buzel is investigating. Please remember that most UFO sightings can be explained as something natural or man-made. The above quotes were edited for clarity. Please report UFO activity to MUFON.com.