In the past month, fireball-type UFOs have been seen at multiple locations in the United States. 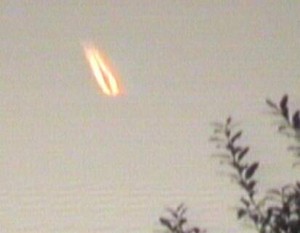 But despite the explanation of illuminated plane contrails, many believe these strange fireballs to be extraterrestrial craft. While some aerial “fireball” objects are most certainly airplanes with illuminated contrails, or meteors, or other space junk, it does not mean that EVERY object in the sky with a fireball-like appearance is one of these known objects. Unfortunately, it seems that, all too often, critics are quick to assign a “known” to an “unknown.” A UFO may display characteristics similar to planes or space debris, but before forcefully identifying the object, it is important to fairly consider the possibility that the object is something else entirely.
ca California Czech Republic Extraterrestrial Featured fireball FL flying saucer GA mystery missile Santa Monica Sighting UFO UFO News ufo photos ufo video ufos 2010-12-09
Jason McClellan
Previous: UFO case files revealed pt VIII
Next: Daily UFO Headlines 12/9/10