A witness captured video of a silent UFO flying over the South East England city of Canterbury at approximately 11:00 p.m. on June 29, 2013.

Sasha Shaker and his wife Carly were driving home when Carly noticed the peculiar aerial object. When they arrived home, the couple watched the UFO for ten minutes before Sasha ran inside to get his iPad. He recorded ninety seconds of video with his iPad, and uploaded his video to YouTube. He described to the Kentish Gazette, “It was pretty much your archetypal UFO; circular, silent and changing colour between blue, red and green. We didn’t know what it could be.” 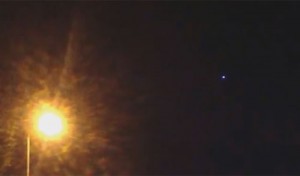 But he clarified, “I’m not an alien believer or anything, I was just intrigued by what it was.”

Sasha further described, “It was making no noise and a couple of times moved really quickly from left to right, which made us think it wasn’t a remote controlled plane.” But as the Kentish Gazette points out, some suspect the UFO Sasha recorded on video was simply an LED-adorned remote-controlled quadcopter, or similar toy craft.

The couple watched the UFO for a total of approximately thirty minutes before going to bed.