An astronomer is already claiming to have detected a signal coming from the planet Gliese 581g. 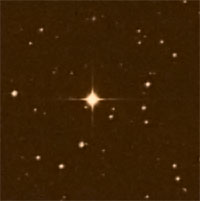 After the recent discovery of the Earth-like planet Gliese 581g, an astronomer is already claiming to have detected a signal coming from the planet. Ragbir Bhathal, a scientist at the University of Western Sydney, claims he detected a pulse of light nearly two years ago, originating from Gliese 581g’s area of the galaxy. He described the sharp signal as “sort of a laser lookalike thing.”

Frank Drake, SETI’s founder, is very suspicious of this report though. When Bhathal initially reported the signal, Drake requested details from him, but Bhathal would not provide any. Drake thinks it is very unlikely that the signal Bhathal allegedly observed came from the direction of Gliese 581g.

Gliese 581g is one of two new planets discovered orbiting Gliese 581, a red dwarf star. The star is located approximately 20.5 light-years from Earth. So far, six planets have been discovered around Gliese 581.