Home / Articles / Extraterrestrial Life / Should we send messages to aliens?

Should we send messages to aliens?

SETI (search for extraterrestrial intelligence) scientists use radio telescopes to listen for incoming messages from extraterrestrial civilizations. But while scientists wait patiently to hear anything from ET, others have already sent preemptive messages into space. In 2012, the National Geographic channel (NatGeo) beamed messages into space as part of a marketing campaign for the network’s show Chasing UFOs. And in June of this year, the Lone Signal company launched “the world’s only messaging platform and social community for interstellar communication.”

Messaging to extraterrestrial intelligence (METI) efforts have been taking place for decades. But scientists are divided when considering whether attempting contact with extraterrestrials is wise. Theoretical physicist Stephen Hawking has warned against contacting aliens on several occasions. During a radio interview in 2012, Hawking explained his stance against attempting contact, stating, “If aliens decided to visit us then the outcome might be similar to when Europeans arrived in the Americas. That did not turn out well for the Native Americans.” Similarly, during a lecture in 2012, astrophysicist Brian P. Schmidt advised against attempting contact with intelligent extraterrestrials. He stated, “I think it is probably not the smartest thing to tell the aliens where we are, as any encounter with aliens may not be a happy one.” 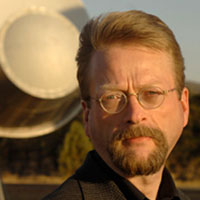 Dr. Vakoch researches ways that different civilizations might create messages that could be transmitted across interstellar space, allowing communication between humans and extraterrestrials even without face-to-face contact. He is particularly interested in how we might compose messages that would begin to express what it’s like to be human.

In a recent interview on BBC Radio 4, Vakoch stated, “Arguably, we as the younger civilization have more to gain from contact with another civilization. It’s possible that every civilization out there is . . . listening. And maybe it takes an audacious young civilization like ours to really take the initiative.”

Vakoch leads a project for the SETI Institute titled “Earth Speaks,” which invites people to submit “their text messages, pictures, and sounds, as they ponder what they would want to say to an extraterrestrial civilization.” Messages submitted to the project are studied, and Vakoch and his team are working to identify and tag major themes in the messages. The “Earth Speaks” website explains:

By tracking demographic variables for each person submitting a message, we will be able to identify commonalities and differences in message content that are related to such factors as nationality, age, and gender. Rather than trying to identify a unified ‘Message from Earth,’ [‘Earth Speaks’] will help understand differing perspectives on the appropriate content of interstellar messages . . . As a result, ‘Earth Speaks’ will provide a more broadly representative view of our species than previous messages.

As he explained to BBC Radio 4, Vakoch feels that “Earth Speaks” is “a starting point to really generate the kind of global discussion that we need before we take that serious step of announcing ourselves to the cosmos.”