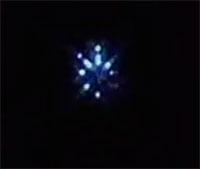 Residents in Shanghai, China were bewildered by multicolored UFOs in the night sky on Monday, October 10.

According to New Tang Dynasty Television, a witness stated, “I feel curious about the object. I don’t know what it is. It can’t move like a plane and can change color into green and red alternatively.”

But the UFOs were later identified as large kites equipped with hundreds of colored LED lights. The video below shows the incredible light show put on by these kites, and also shows how witnesses would have difficulty identifying the object in the night sky.