SETI is seeking donations from the public to resume operations at the Allen Telescope Array. 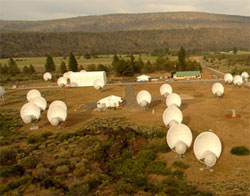 SETI is calling their fundraising effort SETIstars. And as the Huffington Post reports, “The SETIstars program was set up and presented to the SETI Institute by a number of Silicon Valley technologists who wanted to help SETI raise money by creating something that . . . would take advantage of the evolving world of social networking.”

Tom Pierson, SETI’s CEO, told AOL that the institute’s goal is to raise $200,000 from the public, and combine that amount with funds that have already been raised. This level of public support would enable SETI to resume operations, which includes utilizing their array of radio telescopes to listen for signals from extraterrestrials.

According to Pierson, the Allen Telescope Array costs $2,500,000 a year to operate.