A military combat instructor says he caught a UFO on video that could not be seen by the naked eye. He described the object as a “Slow flying, low, silent, see-through triangle.”

We recently posted a story about UFO sightings from the North Carolina beaches near the town of Wilmington. We received many responses from others in the area who also had sightings. However, one of the most spectacular cases we received is this one from Leland, North Carolina, which is on the northwest side of Wilmington.

This case was sent to us by a field investigator with the North Carolina chapter of the Mutual UFO Network (MUFON), Kenneth Bates. Bates says he believes the craft caught in this video, “while probably not alien, it is a video of a craft that possesses very advanced technology: (1)the ability to ‘cloak’ itself and (2) a reflective component that gives the illusion of transparency.”

He stresses that he, the director of North Carolina MUFON Lakita Adams, and the witness, all feel that the UFO is most likely some sort of advanced military aircraft with a cloaking device.

According to the investigation report filed by Bates, the witness has been in the military or a military contractor for the last 24 years. Currently he is an instructor for close quarters combat.

The witness, who shall remain anonymous, says he was out trying to get a look at the moon with his telescope when the event took place. He wrote, ” It was, I believe, the night after the full moon in May.” He says he always has his night vision goggle with him, and that night he had a PVS-14 night vision monocular with a 3x magnifier on a tripod attached to a video camera, and a pair of PVS-7D goggles around his neck. 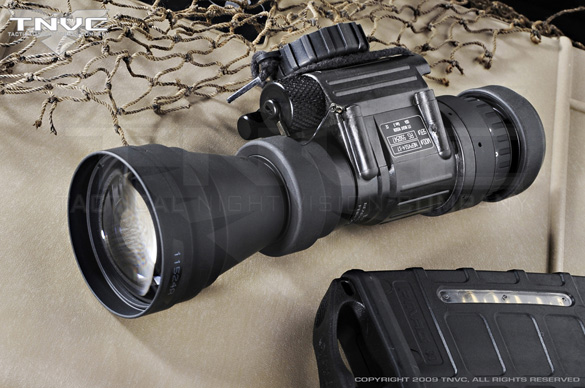 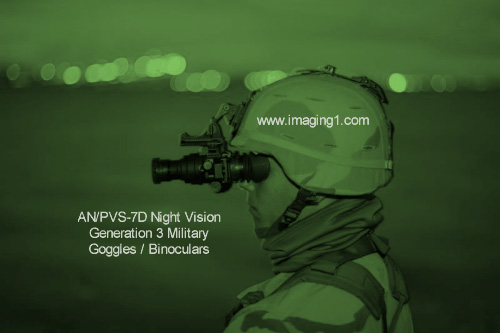 While scanning the night sky with his goggles he spotted what he thought to be a plane coming towards him from the north. It was heading south. He says he estimated the object was at about 5000 feet, which is relatively low. He says he is a skydiver and long distance shooter, so he feels he is a good judge of distances.

He thought it was odd that he was not hearing anything, so he started to record the object. He first caught the object on video when it was at about a 75 degree angle, and was amazed that as it passed over he still could hear no sound.

He was further astounded when he noticed through the monocular that as it passed by stars he could see the stars through the craft.

He says he watched the object for about 13 to 14 minutes. At one point he had lost track of it. When he took the goggles off he noticed that he could not see the lights from the craft with his bare eyes. He says, “So either all the lights were very dim and the night vision enhanced them like they were made to do, or the lights were infrared, basically naked to the naked eye.”

It finally flew out of sight to the south. He summarized his sighting, “So to recap: 1: it was silent. 2: it was very slow moving. 3: the lights were either very dim or infrared. 4: I could see through it!!! Adaptive camouflage??? First time I’ve seen the real thing. 5: I couldn’t see it without night vision goggles.” 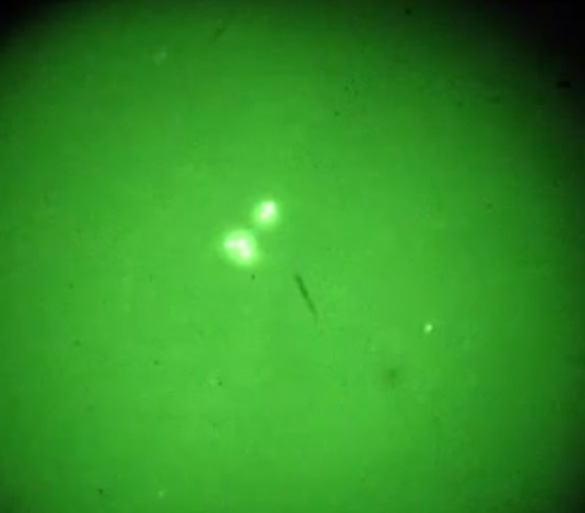 Close-up of the object in the night vision video. (Credit: MUFON)

You can read the entire text of his report here.

Bates says he was able to speak to the witness and obtain the video you see at the top of this story. In his report, Bates described the object as a “Triangular craft with five lights in a 2-1-1-1, ( L-R ) one of them flashing.”

Bates found that the witness’ report matched the video perfectly and found him to be “highly credible.”

1. On two occasions it appears that the craft flies in front of celestial objects but they can be “seen” THROUGH the body of the craft.

2. The witness states the craft was visible only though NV/IR device.

3. The five-light configuration (back to front: 2-1-1-1) is unknown to us (the lead light might be triangular?) 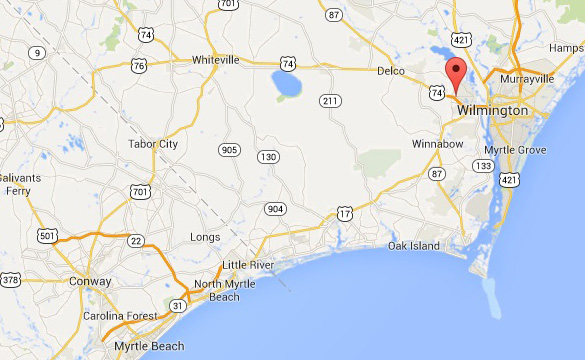 Upon review of the video, the object does seem to be directly overhead, and although you can hear the witness messing with his equipment and whispering to himself in amazement, there is no aircraft noise. As Bates and the witness have stated, as the craft flies in front of stars the stars remain visible. The witness says the craft was triangular shaped, and if that is the case, the stars being seen through the craft would be very strange.

However, if the craft is shaped like a normal airplane or a helicopter, where we expect there to be structure, there may not be. Then again, watching the video with this frame of mind, I looked for a flicker as a wing or skinny bit of fuselage passed in front of the stars. I see no such flicker. The stars seem to be consistent in luminosity.

As for the witness not being able to see the aircraft’s lights with his naked eyes, that is possible using conventional technology. In fact, the military currently uses aircraft lights that can be used in a mode that can only be seen by night vision equipment. One distributor of such lights writes on their website, “When in the covert mode individuals not wearing night vision aids cannot easily detect these light sources, however they are readily recognized through Night Vision Goggles.”

While the technology used to make the light visible to night vision equipment and not to the naked eyes is nothing extraordinary, when it comes to running in complete silence, and using cloaking devices, well, that is straight out of Science Fiction.

It has been suggested that the stars appearing to be seen through the craft might be an illusion caused by the night vision optics. Perhaps that is the case. I have reached out to experts on that topic and will update you with their responses.

In the interest of getting this story out to you all I am not waiting before I post this, but be sure to check back for updates. Many of these UFO stories are ever evolving, just like the earlier North Carolina UFO story, which continues to generate responses.

If you are a night vision expert, or even a hobbyist, or if you have any input whatsoever, please feel free to respond below. Your help in shedding more light on this mysterious, and fascinating, night vision video is greatly appreciated.

For some more insight into what might have been captured in this video, I asked for some input from Marc D’Antonio, the chief photo and video analyst for MUFON.

He wrote, “I looked at this night video and what struck me was that I have SEEN this before. This is very likely none other than an aerial refueling operation at night.”

D’Antonio says he actually saw a night time refueling over his house, “At first when I was observing the night time scene I knew that aircraft were involved but couldn’t understand why they were so close. Then it dawned on me a short moment later that it might have been a aerial refueling operation. Two days later the same thing happened only THIS time it was during the late afternoon and I could see the two aircraft.”

He was able to take a picture. 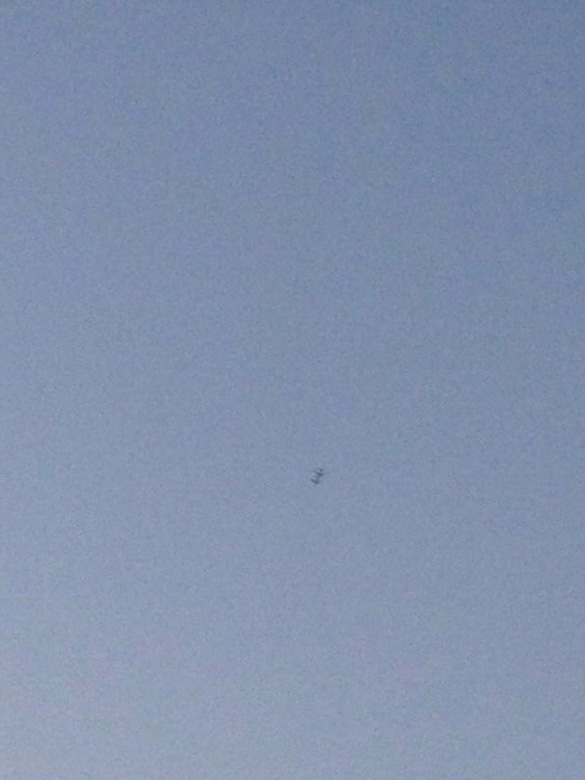 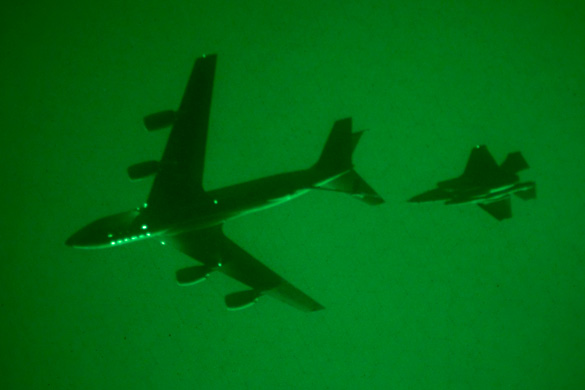 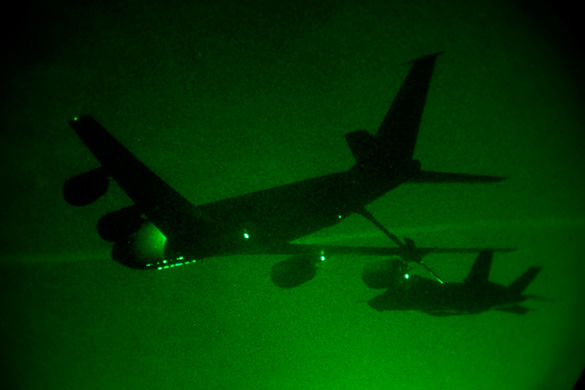 For comparison, D’Antonio sent an image similar to the one above. He noted, “Attached is another photo of a similar op. Notice the long linear array of lights at the front of the fueler? These are like a runway for the pilot to align with. In this video you have Alejandro it appears that the long linear array is also present in the lead aircraft.”

D’Antonio continued, “As far as the stars passing ‘through’ the aircraft, they can clearly be seen passing between them but if you end up thinking that this is one large object then one might think you are seeing stars passing through a transparent larger object.”

I also reached out to Ben Hansen, host of the television show Fact or Faked. He is very familiar with night vision, and sells night vision equipment similar to that used to capture the video ib his website NightVisionOps.com. Hansen says he disagrees with D’Antonio’s analysis.

Hansen notes that in the video the craft appears to do a 180 degree turn. He says refueling aircraft would not be able to do that, and aircraft that large take a much longer time to turn than what is shown in the video.

Hansen told the Huffington Post, “I spoke with a guy who was in the Air Force with advanced degrees in aeronautical science, and after showing him the video, he said you have 30 seconds to connect a plane that’s being refueled to the refueler, and protocol is to maintain straight and level flight while you’re refueling. Both he and I agree that it makes no sense, and would probably be impossible for this to be any type of plane that’s refueling while doing a turn.”

D’Antonio believes that the aircraft itself did not turn, but that the man taking the video moved the camera to keep the object in frame, making it appear as though the craft turned.

Hansen remains intrigued by the video, and is continuing to investigate. He says, “if this is a full-scale craft and not some type of a remote controlled model, this exhibits unconventional maneuvering and cloaking capability that’s quite extraordinary.”

The MUFON Field Investigator, Ken Bates, clarified a couple of items for me. He wrote, “The witness added a couple of things to the record during the phone interview. About ½ way through the video, the object appears to make 180 degree turn. What actually happened was the witness changed the orientation of the night vision recording device.” Also, “The person who did the filming contacted me after reading this and was fairly amused by Marc’s conclusion—-he pointed out that mid-air refueling is a rather dangerous procedure and wouldn’t ordinarily be done over a populated area such as Wilmington, NC.”