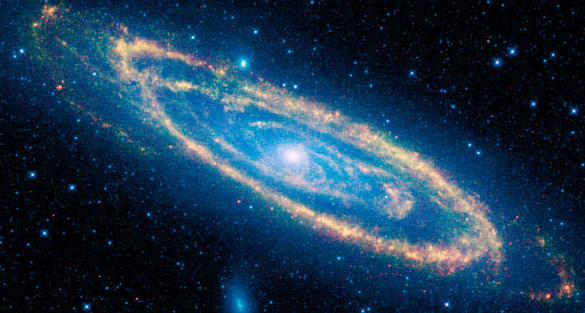 Scientists examined 100,000 galaxies using NASA’s WISE satellite to look for telltale heat signatures that may indicate the presence of an advanced alien civilization. While the scientists say they found no “obvious” signs of alien civilizations, they found 50 of the galaxies did show elevated levels of radiation and deserve further study.

The study was published this week in The Astrophysical Journal, and an article with comments from the research scientists was posted on the Penn State Eberly College of Science website. The two lead scientists work at The Pennsylvania State University.

A portion of the science complex at Penn State’s Eberly College of Science at University Park, including the Gateway to the Sciences, the Chemistry, Life Sciences, Ritenour and Thomas Classroom Buildings.
(Credit: The Penn Stater/Tina Hay)

Jason Wright, an assistant professor of astronomy and astrophysics at the Center for Exoplanets and Habitable Worlds at Penn State, conceived of and initiated the research. Wright says, “The idea behind our research is that, if an entire galaxy had been colonized by an advanced spacefaring civilization, the energy produced by that civilization’s technologies would be detectable in mid-infrared [MIR] wavelengths — exactly the radiation that the WISE satellite was designed to detect for other astronomical purposes.” 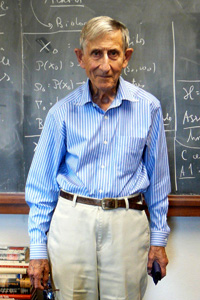 The idea that advanced alien civilizations could be detected by their mid-infrared emissions was purposed by theoretical physicist Freeman Dyson in 1960. Like earthlings, he speculated that ETs would also need an increasing amount of energy as their technology advances.

He further proposed one way aliens might collect more energy is by surrounding their star, or stars, with solar energy collectors. This concept has been coined a “Dyson sphere.” In the event of a Dyson sphere, the radiation from the civilization would be higher than the light that should be emitted by the star, which is dimmed by the solar panels that surround it.

“Nearby Type iii (galaxy-spanning) Kardashev supercivilizations” is what the Wright’s group was looking for. 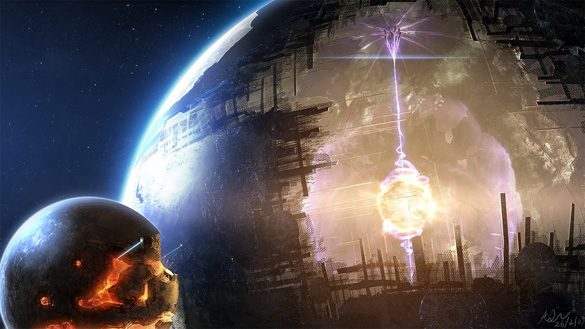 According to the Penn State article, “Roger Griffith, a postbaccalaureate researcher at Penn State and the lead author of the paper, scoured almost the entire catalog of the WISE satellite’s detections — nearly 100 million entries — for objects consistent with galaxies emitting too much mid-infrared radiation.”

He then took a closer look at around 100,000 images of galaxies that he believed were most promising. Out of those, Griffith says, “We found about 50 galaxies that have unusually high levels of mid-infrared radiation.” 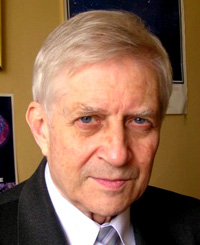 Despite Griffith’s discovery, the paper claims, “No galaxies in our sample host an alien civilization reprocessing more than 85% of its starlight into the MIR.” Which, according to their study, means they did not find a Type 3 Kardashev civilization.

The 50 galaxies Griffith refers to “have MIR luminosities consistent with > 50% reprocessing.” So they still demonstrate elevated levels of radiation, and according to Griffith, “Our follow-up studies of those galaxies may reveal if the origin of their radiation results from natural astronomical processes, or if it could indicate the presence of a highly advanced civilization.”

“Our results mean that, out of the 100,000 galaxies that WISE could see in sufficient detail, none of them is widely populated by an alien civilization using most of the starlight in its galaxy for its own purposes. That’s interesting because these galaxies are billions of years old, which should have been plenty of time for them to have been filled with alien civilizations, if they exist. Either they don’t exist, or they don’t yet use enough energy for us to recognize them,” Wright said. 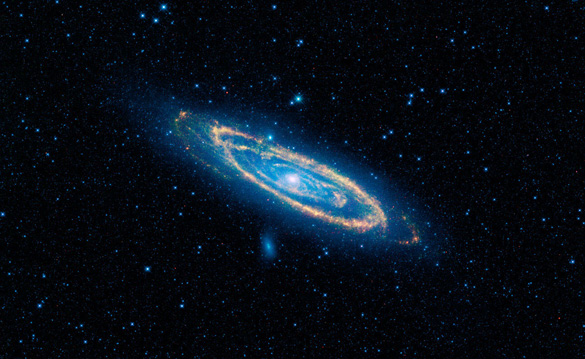 A false-color image of the mid-infrared emission from the Great Galaxy in Andromeda, as seen by Nasa’s WISE space telescope. The orange color represents emission from the heat of stars forming in the galaxy’s spiral arms. The G-HAT team used images such as these to search 100,000 nearby galaxies for unusually large amounts of this mid-infrared emission that might arise from alien civilizations. (Credit: NASA/JPL-Caltech/WISE Team)

Scientific American was able to discuss the studies findings with Dyson himself. He is now 91 years old, and still interested in the Search for Extraterrestrial Intelligence (SETI). They contacted him at his office at the Institute for Advanced Study in Princeton, N.J., where he said he is neither surprised, nor discouraged by the results.

“Our imaginings about the ways that aliens might make themselves detectable are always like stories of black cats in a dark room,” Dyson says. “If there are any real aliens, they are likely to behave in ways that we never imagined. The WISE result shows that the aliens did not follow one particular path. That is good to know. But it still leaves a huge variety of other paths open. The failure of one guess does not mean that we should stop looking for aliens.” 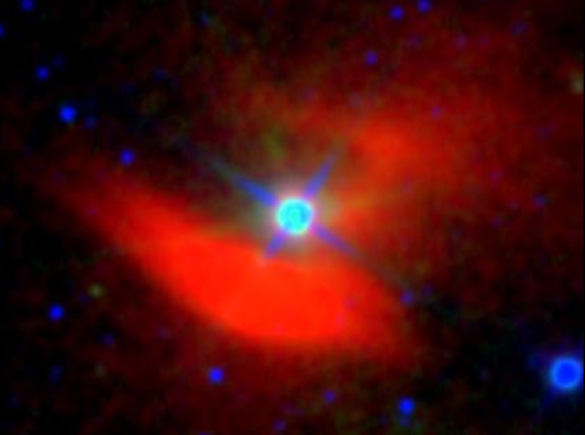 A false-color image of the mid-infrared nebula surrounding the nearby star 48 Librae. This nebula was discovered in the course of the G-HAT survey using Nasa’s WISE space telescope. The nebula is invisible in most kinds of light, including visible light. (Credit: Roger Griffth (Penn State) / IPAC (NASA/JPL-Caltech))

In total, the paper concludes that although none of the galaxies appear to meet the criteria for a type 3 Kardashev civilization, along with Griffith’s 50 anomalous galaxies, there are another 45 sources of MIR that need to be researched. The abstract ends, “These 90 poorly understood sources and 5 anomalous passive spirals deserve follow-up via both SETI and conventional astrophysics.”