Shostak spoke about the SETI institute and the overwhelming odds for the possibility of intelligent life elsewhere in the universe.

On Saturday May 29th, Arizona residents had a unique opportunity to see two of today’s most famous scientists at the Phoenix Comicon. Although both are skeptics when it comes to UFOs, their presentation, entitled Supersized SETI panel, was focused on the possibility of extraterrestrial life.

Arriving at the Phoenix convention center I had to take a breath and muster my strength to wrestle my way through a humongous crowd of Comic book, science fiction, and anime fans; a good portion of them in costume. It was overwhelming to see the incredible turn out, filling the huge convention center as people milled around, shoulder to shoulder to see their favorite comic book artists, actors, voice artists, or in some cases, scientists.

Astronomer, Seth Shostak, Director of the Search for Extraterrestrial Intelligence (SETI) and Astrobiologist, Cosmologist, and Theoretical Physicist at the University of Arizona, Paul Davies headed up the Super-Sized SETI panel. Shostak is often seen on television talking about his organization, and Davies is all over the news these days, having recently address the UK’s Royal Society, and the Vatican’s Pontifical Academy for Science. Each gave a thirty minute lecture prior to opening up for questions and answers.

Shostak spoke about the SETI institute and the overwhelming odds for the possibility of intelligent life elsewhere in the universe. In fact he went so far as to say that if you believe there aren’t ET’s out there, then you believe in miracles. He went on to explain SETI’s project of listening for radio waves, in hopes that an intelligent civilization would send us a message. When asked if he thought people would panic if SETI did find a signal from an extraterrestrial civilization, he replied that 1/3 of the American public believe in abduction, and another 1/3 believes that ETs are buzzing around in UFOs, and people aren’t freaking out right now, so he doesn’t think the public would have any trouble handling the news. 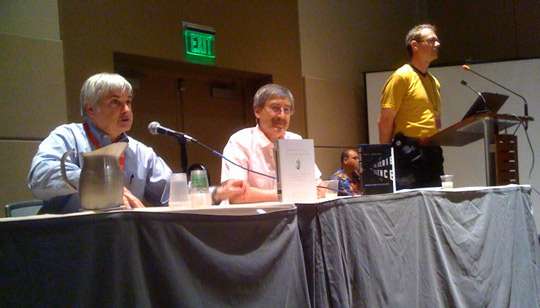 Davies acknowledged that the SETI program was a “needle in a haystack with a vengeance.” His focus is looking for ET down here. He believes that perhaps there is another string of life on earth started by micro-organisms that have hitched a ride on asteroids from another planet. While Shostak is skeptical of this idea, Davies says ET could be right under, or in our nose.

Davies also made another interesting observation. He has seen the change in attitude regarding the idea of extraterrestrial life in the scientific community. It used to be shunned, but now the idea is looked upon more positively. However, he says that the science hasn’t changed, there is no new evidence, and it is the scientists that have changed. He believes this is evidence that scientists are clueless.

Davies has a positive perspective in our quest for extraterrestrial brotherhood. He believes that advanced civilizations that may be out there have most likely already faced the challenges we face today, and that they would be able to help guide us through some of our turmoil. One attendee asked if he thought it was dangerous to try to contact ETs, like Steven hawking suggested. Davies replied that first, he doesn’t believe that it is harmful, because they would detect us long before they would receive any kind of transmission from us. He also pointed out that whether we like it or not, we have been sending our presence into space by means of light for a long time. That even before they detected any radio waves, they would see that our planet is lit up by non-natural lighting, so if we wanted to hide our presence, we already have a problem.

Prior to their talk I was able to meet with Shostak for a one on one interview. I asked him questions more directed toward UFO research. I asked about how he feels about some of the great cases that have credible witnesses. In particular I mentioned the sighting that Astronaut Gordon Cooper had at Edwards Air Force Base, when a silver saucer shaped object was filmed landing on a lake bed and then flying off. Cooper says he was instructed to send the film ti his superiors, and didn’t know where it went after that. Shostak replied, “I have talked to Edgar Mitchell, I have talked to a lot of people, Story Musgrave and other astronauts, these are credible people. That isn’t really the issue. The issue isn’t whether they are credible, if Edgar Mitchell said I think I saw my neighbor commit a murder, that is eye witness testimony, and the fact that he had film of this thing and then had to send it away just means that it is a secret. It doesn’t tell anything about whether it is extraterrestrial or not. So I am not going to believe just because the witness is credible.” He went on to point out, “I assume that all witnesses are credible, actually. The ones that call me up are probably credible. I have never heard from anybody that sounds like they are making stories up, never.”

I then asked that if there was a case like this was to happen now, whether the SETI institute would be able to lend a hand with the investigation. He told me that this wasn’t really SETI’s area of expertise, that instead “What you want is someone that is an expert in forensic techniques.” Shostak acknowledged that the majority of scientists at the SETI institute are astrobiologist, but “they are looking for life on Mars, under the sands of Mars.”

Our time was cut short, so I asked what advice he would give UFO researchers. He answered, “I don’t know that I could give any good advice, but simply to say, I am waiting to see [a UFO] stacked up on display at the Smithsonian. It requires something that is incontrovertible. The difference between UFO research and SETI is that SETI doesn’t claim to have found anything. In fact, quite the opposite, we are quite candid about the fact that no signal, we have found lots of signals, tens of thousands, hundreds of thousands of signals, but none of them is clearly, clearly in a way that can be quickly checked extraterrestrial in origin. Now the UFO community claims that yes, they have success, they are here. That’s the claim. They are not saying, maybe they are here, maybe we should look around. They are saying they are here, and for that… I am looking for the really good evidence”