Scientists are aiming a radio telescope at select planets in hopes of detecting alien signals. 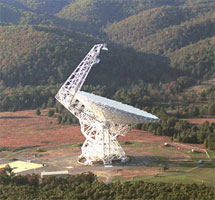 Scientists are aiming a radio telescope at select planets in hopes of detecting alien signals. According to Space.com, this new search began last week, and comes just one month after the SETI (Search for Extraterrestrial Intelligence) Institute was forced to suspend their operations due to budget problems.

The radio telescope is targeting 86 planets that have been selected as worlds most likely to resemble Earth. NASA’s Kepler space telescope provided the data that allowed scientists to make this determination.

The new search for extraterrestrial signals is led by University of California, Berkeley astronomers, and utilizes the Robert C. Byrd Green Bank Telescope in West Virginia, the largest steerable radio telescope in the world.

Once the scan of all 86 planets is complete, the data will be made available to amateurs involved with the SETI@home project. As Space.com explains, “SETI@home harnesses the power of many interconnected home computers, using them as a sort of supercomputer to analyze mountains of data.” There are an estimated one million people who participate in the SETI@home project.