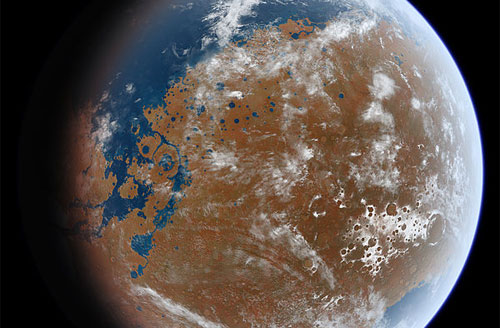 Scientist asserts that Earth life was seeded by Mars

A new study contributes to the theory that Earth life began on Mars and was transported here via meteorite.

The new argument, in a nutshell, is that young Mars had a more oxygen-rich atmosphere than Earth did 4 billion years ago, and was drier. This would have resulted in a different mineralogical surface environment, one that could have provided a catalyst for the assembly of key RNA molecules and all the biotic chemistry leading to life as we know it. Subsequent asteroid impacts on Mars would have spewed chunks of rock into space, carrying life (presumably in microbial form) through the solar system and onto the surface of a youthful Earth.

Benner’s recent research found that an oxidized form of the element molybdenum was likely on Mars’s surface at one point in history, but not on Earth’s. Space.com reports that molybdenum may have been crucial to the origin of life. Benner explains: 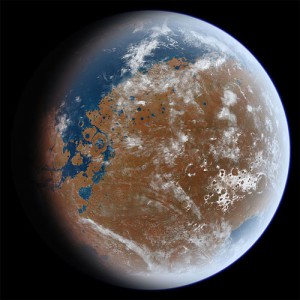 It’s only when molybdenum becomes highly oxidized that it is able to influence how early life formed . . . This form of molybdenum couldn’t have been available on Earth at the time life first began, because 3 billion years ago, the surface of the Earth had very little oxygen, but Mars did. It’s yet another piece of evidence which makes it more likely life came to Earth on a Martian meteorite, rather than starting on this planet.

The idea that life from elsewhere could have been transported to Earth (a theory known as panspermia) is not new. But as Scientific American points out, the theories surrounding the initial steps in the creation of life are heavily debated. And Benner’s theories rely heavily on assumptions/educated guesses regarding the environments on ancient Earth and Mars. Scientific American concludes, “So, did Mars seed life on Earth? We simply don’t know. However, by exploring the possibility we certainly stand to gain information from the fact that young Earth and young Mars probably were rather different – chemically and environmentally. Two natural test-tubes rather than one.”