The case occurred in the village of Lesopilniy in the Khabarovsk region in Russia’s Far East and it involved dozens of witnesses, including soldiers at a military base nearby who fired artillery shells at the UFO without harming it. 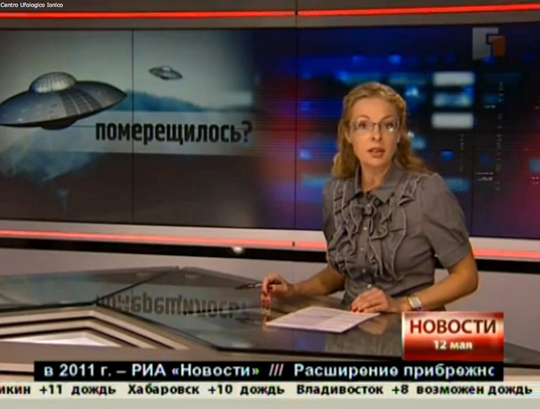 A news report broadcast by Gubernia TV in Russia about a multiple-witness sighting of a large UFO—posted on YouTube on May 12—has elicited considerable attention in several ufological news forums, particularly in Italy, but little else in the Western mainstream media. The case occurred in the village of Lesopilniy in the Khabarovsk region in Russia’s Far East and it involved dozens of witnesses, including soldiers at a military base nearby who fired artillery shells at the UFO without harming it.

The case seems highly interesting, although at this point we are still unable to verify much of the information beyond what was broadcast by Gubernia TV. According to the website OstaMyy.Com, which covers TV and Radio Channels in Russia, “Guberniya ‘TV’ is the first TV network boundary, the Far East’s largest television station, which is among the ten regional leaders of  electronic media in Russia. The potential television audience exceeds 1500000 people.” Despite the Google translate flavor, you get the idea that Gubernia TV is a mainstream network in Russia, which can also be observed in the straight new formatting of the UFO broadcast itself.

The UFO story, which lasts 3:07 minutes, located and interviewed several eyewitnesses, including a boy who tried to photograph the object with his cell phone. Some sketches of a classic saucer-shaped object are shown on camera. A summary of the Gubernia broadcast was published by several Italian UFO news forums and shorter versions appeared on some English-speaking forums like Above Top Secret. 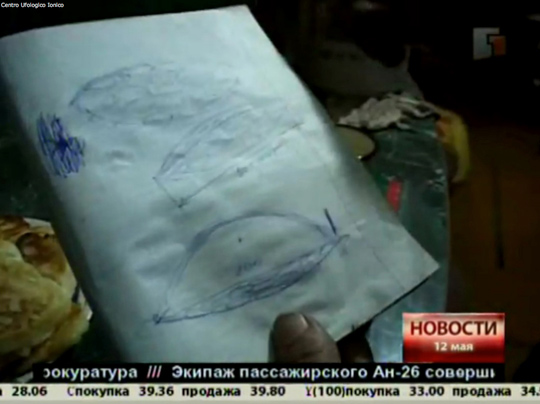 Here is a partial summary of the broadcast as published in the Italian news forums, which we have edited a bit from the rough Google translate:

The villagers of Lesopilniy have witnessed the sighting of a giant UFO, which hovered above their village. What they saw – they say – does not resemble anything known to human science. Local residents were shocked by the sight of the object and fell into a panic.

The object, according to witnesses, had a diameter of about 200 meters and was much larger than a passenger plane.

Most of the people in the course of the sighting returned home in fear and put a “courageous” sentinel to watch the craft. A little boy tried to shoot the object with his cell phone, but without success. The video footage did not show anything, just a black screen. He decided to draw on a piece of paper what he saw.

The object was seen with the naked eye even from people at a military base nearby, but was not detected by radar. The military thus decided to fire artillery shells at the UFO if it became hostile. But, apparently, the mysterious aircraft would then start up quickly and disappear from view.

Despite the terror of the witnesses, we have had conventional explanations of the sighting by scientists and government authorities. Here they are listed below:

Meteors or other atmospheric phenomena that are not recognized by witnesses, reflections of light in water, marsh gas, swarms of insects with brilliant backs.

The witnesses did not accept the hypothesis of the government spokesmen and tranquilizers and are certain of what they saw. And then we wonder: is it possible that so many witnesses, including soldiers, have been misled by a swarm of giant insects…? 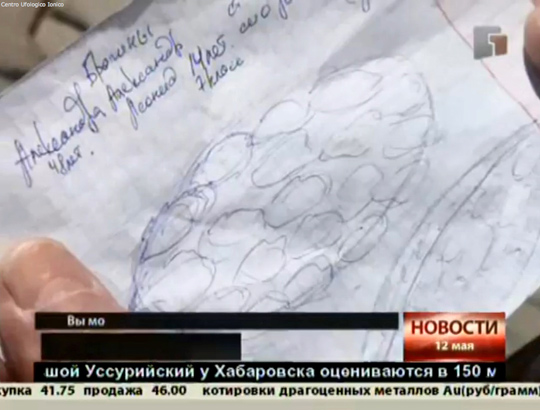 Some thoughts on the case

We contacted our friend and Open Minds contributor Dr. Vladimir Rubtsov from the Ukraine, a scientist who was involved in official scientific UFO investigations in the old Soviet Union, about his thoughts on the Lesopilniy case. His brief response sent by email was that, “as for the UFO observations in Lesopilniy, my only conclusion may be just that: information insufficient. The eyewitnesses seem to be sincere and they most probably saw something strange – but what was it remains more than vague.”

A few more tentative observations can be made about this case. One, as pointed earlier, is the straight news formatting of the Gubernia broadcast and the fact that all the people they interviewed seemed to be direct eyewitnesses. Another are the ludicrous explanations offered by Russian government spokesmen: marsh gas and swarms of insects with brilliant backs! Give me a break. The last time a government spokesman tried to use swamp gas in a high profile case was when Dr. Hynek offered it as a possible explanation for the UFO sightings in Ann Arbor, Michigan, in 1966. The good doctor had to spin this answer for the rest of his life.

As for swarms of glowing insects, even the last line in the Gubernia TV broadcast made fun of this hypothesis. Reflections of light in water doesn’t make any sense either since the Khabarovsk region is nowhere near the coast. Now, it’s not clear that these lame explanations were offered specifically with regards to the Lesopilniy case or were just culled from earlier general pronouncements about UFOs/IFOs by Russian skeptics. I tend to go for the last option, as I remember reading in an old Sputnik magazine (the equivalent to Reader’s Digest in the old USSR) the theory about the glowing insects.

A final point worth mentioning concerns the rich history of UFOs in the Russian Far East. In the current issue of Open Minds magazine I wrote a story about a somewhat famous and highly puzzling crash of an unknown object in Dalnegorsk in 1986. The January 29 crash was followed by a large UFO wave which was documented by Dr. Valery Dvuzhilny, a scientist with the Far Eastern Commission on Anomalous Phenomena. One of the biggest cases during that wave occurred on November 28, 1987 when, wrote Dvuzhilny, “33 UFOs were flying at a low height over the Eastern coast of Primorye. Their flights took place between 9:10 pm and midnight. They were of different shape: cylinder, cigars, globes. They were flying over five regions and twelve settlements.”

Let’s hope that someone of the caliber of Dvuzhilny or Rubtsov will investigate and follow up the Lesopilniy incident.