On October 26, 2011, the Royal Society announced that its journal archive has been made available to the public, free-of-charge. The material that was once restricted to pay-per-view access is now freely accessible online. Approximately 60,000 historical scientific papers make up the free archive, and come from various Royal Society publications. The Royal Society publishes peer-reviewed papers on varying scientific topics, including extraterrestrials and UFOs.

According to the Royal Society’s announcement, Professor Uta Frith FRS, Chair of the Royal Society library committee, stated, “The release of these papers opens a fascinating window on the history of scientific progress over the last few centuries and will be of interest to anybody who wants to understand how science has evolved since the days of the Royal Society’s foundation.” The society’s first publication appeared in 1665. Yes, you can read articles from 1665 in the archive.

The Royal Society’s website explains that the society is a “fellowship of the world’s most eminent scientists and is the oldest scientific academy in continuous existence.” The society was founded in 1660 and serves as the UK’s national academy of science. The Royal Society proudly identifies itself as the world’s oldest scientific publisher, and currently publishes nine peer-reviewed journals.

While pondering all things scientific, the Royal Society has explored UFO/ET issues on many occasions. In January 2010, representatives from NASA, the European Space Agency, and the UN Office for Outer Space Affairs gathered in London to discuss extraterrestrial life at a two-day conference hosted by the Royal Society. Theoretical physicist, cosmologist, and astrobiologist Paul Davies concluded the event with a lecture entitled “The Eerie Silence: are we alone in the universe?” On a side note, Davies was the recipient of the 2002 Michael Faraday Prize from the Royal Society for promoting science to the public.

UFOs and extraterrestrials have been the topic of several papers published in the various Royal Society journals. One example is a study conducted by Dr. Stephen Hughes, an astrophysicist at the Queensland University of Technology in Brisbane, in which he suggests ball lightning and meteor showers could explain some UFO sightings. 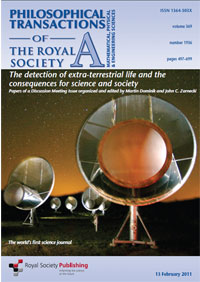 Cover of the January 2011 issue. (credit: The Royal Society)

The January 2011 issue of the Philosophical Transactions of the Royal Society A journal is another example, as that issue’s theme was primarily extraterrestrial. In the journal, scientists mention that the United Nations should be charged with coming up with a plan to deal with extraterrestrials when contact is made. Scientists also examine how contact with extraterrestrial life might affect politics and religion.

And while these and other articles, like SETI (search for extraterrestrial intelligence) pioneer Frank Drake’s article titled “The search for extra-terrestrial intelligence,” might interest you, be aware that not all of the Royal Society’s content is currently available for free. Only content that was published more than 70 years ago is freely available. Newer content still requires a fee to view. So while you’re certainly welcome to browse writings by Isaac Newton, Charles Darwin, and Ben Franklin, you still have to pay for most of the articles about extraterrestrials and UFOs.