Nothing should surprise me when it comes to Stan Romanek and his case, but what happened on my radio show today was a first for my program. 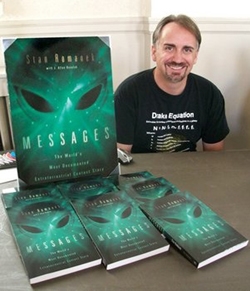 Stan Romanek and his book Messages.

Nothing should surprise me when it comes to Stan Romanek and his case, but what happened on my radio show today was a first for my program.   Apparently some sort of computer like voice came through his phone line and threatened him.

Romanek has been having strange experiences for years.  It started with UFO sightings, and then moved on to apparent abduction events, and got even stranger from there.  He made international news when a still from a video he took, that appears to be a grey alien, was circulated throughout the media.  Although a picture alone is hardly evidence, most people don’t know that Stan has an abundance of evidence that supports that he has been abducted by something or someone, including video footage of UFOs, Balls of light, and possible ETs.

I began investigating this case several years ago.  Right off the bat I got a strange phone call from a computer sounding voice.  It said something about how I should feel honored to be working on Stan’s case.  According to my phone records the call came from a blocked number.

A few days later, I had the chance to spend the day with Stan and his wife, and I found that they and others involved with the case had also received several strange phone calls like mine.  Eventually I received another when Stan was stressed out and having a hard time dealing with this experiences.  This call came on my cell phone, and asked me to support him.  This time the records showed that the call had came from my number.

I began investigating the calls further and eventually found the computer voice that was apparently being used.  It was a text to speech program, and the name of the voice we were hearing was Audrey.  It was a female British sounding voice made by a company called Natural Voices.  This demonstrated that it wouldn’t be too difficult for someone to accomplish.

This wasn’t the only evidence of people messing with Romanek.  He has police records, videos and pictures of people breaking into his house.  He has received strange messages in his email, and they have also appeared on his computer.  Is it the government investigating his alien abduction case?  Is it the government making him believe it is an alien abduction case?  Is it some other strange group of people perpetrating a hoax?  We can’t be sure yet.

One thing I did find is that Romanek is not hoaxing all of this material.  I have personally witnessed paranormal activity in his presence, and so have many others.  I have talked about my experiences, and devoted a radio show to the many Romanek witnesses, listen to it here.

So when we got a weird voice today on my radio show during an interview with Romanek, saying “You need to learn to keep your mouth shut”, and then his phone got disconnected, I wasn’t too surprised.  In fact, I have been expecting it to happen on one of Stan’s many radio interviews, I was just hoping it would not be mine.  Listen to the clip of the show here, and the entire show here.

Some people may be excited for something like this to happen on their show, but I am not looking for sensationalistic attention, I am looking for credible evidence.  A voice like this could have easily been done by Stan and gives the impression of being faked.  It can cause people to question his honesty, and perhaps that’s the goal of whoever would do such a thing.

I do not believe Stan faked this event.  I have known him for too long to believe that he would do something like this.  I have no idea how it happened.  I just hope that Stan’s life can get back to normal at some point.

As Stan announced on the show, he is in the process of having a documentary made.  It sounds like it should be done within the year.  Check out his website for the latest on its progress.