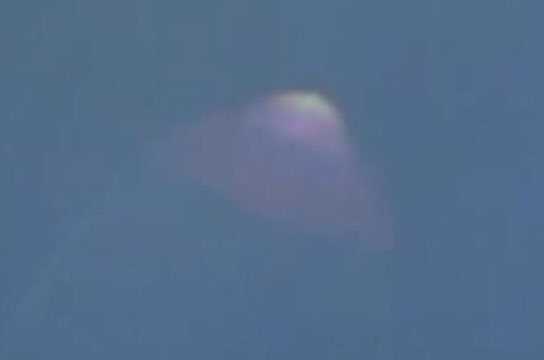 Return of the pink UFO

Pink UFOs are in the news again. Sigh.

It was only back in October when we reported about the many media outlets buzzing about pink UFOs on Google Maps’ Street View. Several experts, including Marc Dantonio, chief photo and video analyst for MUFON (the Mutual UFO Network), concluded that these pink UFOs were the result of simple lens flare.

But now, only a few months later, a news station is reporting on a pink UFO again.

On January 22, St. Louis, Missouri Fox affiliate KTVI reported that a pink UFO appears in Google’s Street View when looking at a particular location in the nearby city of St. Peters. The station asked John Lakey, director of the James S. McDonnell Planetarium at the St. Louis Science Center, for his opinion on the pink UFO in question. Lakey responded, “That’s almost certainly a lens flare effect. Yeah, it just looks like an artifact from a lens.”

Although experts repeatedly explain the cause of these photographic anomalies, there are those who refuse to accept the provided explanation. And, because of this, it won’t be surprising when pink UFOs pop up in the headlines again.