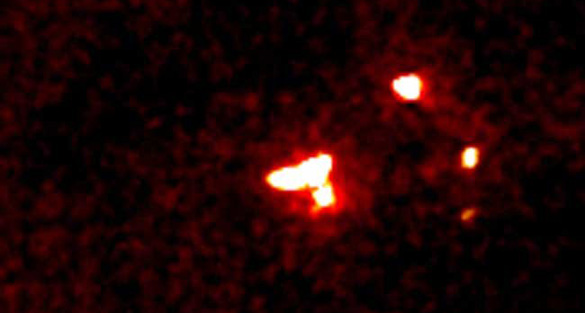 A family in Quebec says they see UFOs every night, so a reporter from a Quebec news agency went out to take a look. Not only did he also witness the strange lights, he snapped this picture.

News reporter Daniel Deslauriers of QMI Agency was tipped off about the regular display of lights by local businessman Benoit Meilleur. Meilleur says he is a skeptic when it comes to aliens, but insisted that he and his family have seen the lights nearly every evening since 2011.

Meilleur recalls the first time he saw them. He says he was returning home when he saw a large triangular object moving very slowly and quietly near his house. He says, “At first I thought it was a plane. It was so low and so slow that I could have hit it with a golf ball.”

He called the Canadian Armed Forces, NORAD, and the provincial police to report the object. None of them appeared to be concerned. He was even asked if he was feeling alright.

“They told me they didn’t detect anything,” said Meilleur.

Samuel, Meullier’s 18-year-old son, says the lights appear every night between 6 and 8 p.m.

In fear of being ridiculed, Meilleur did not even want his name used in an article unless it appeared with a picture of the lights taken by a reporter who also witnessed them.

So, Deslauriers set out to see what the Meilleurs were talking about, camera in hand. He writes that on January 9 at 6 p.m., he did see the lights. They were moving over a wooded area about one hour northeast of Montreal.

He saw the lights appear on the horizon and move across the sky, one at a time, each about one minute apart. They moved silently from the west to the east. There were 10 objects in all, and he watched them for 45 minutes.

QMI contacted Canada’s National Defence and were told that they were not aware of the phenomenon.

As always, when it comes to investigations of the unknown, there are many questions and so few certainties.