This film, simply titled The Rendlesham UFO Incident, is set in present-day, or, close to it. The website for the movie describes:

Keen treasure hunters Gus and Sally invite their friend Jake to film them illegally ‘nighthawking’ on private land, in search of a hoard of Saxon gold.

When their search inadvertently leads them onto land owned by the Ministry of Defence, the group encounters what they can only explain as intense extra-terrestrial activity; blinding flashes of light, alien craft moving in formation, objects flying at phenomenal speed.

Frightened and lost, the group stumbles upon Hangar 10, an abandoned secret military facility. Here they uncover the truth behind the events of 30 years ago as they become accidental participants in a terrifying new alien incursion. 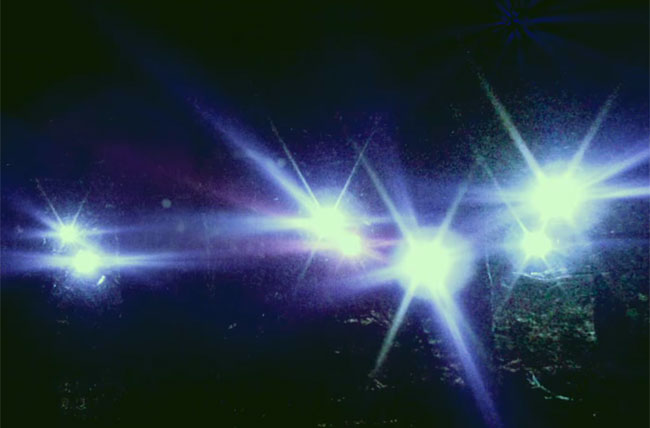 The film’s writer and director, Daniel Simpson, spent four years making the movie. And the process made him a believer. “I’ve looked into it endlessly and I’ve looked into the faces and eyes of people telling the story and i just have to believe them, that’s what you have to go on,” he told ITV. “I believe something happened that we will never know what it was, but I believe people do know.”

The real Rendlesham UFO incident occurred in December of 1980 near twin NATO air bases in Suffolk, RAF Bentwaters and RAF Woodbridge, both which were leased to the United States Air Force at the time. Military personnel experienced several UFO sightings over a span of a few days. And, a recent UK Defence Intelligence memo suggests witnesses may have been exposed to UFO radiation.

The Rendlesham UFO Incident, the movie, is scheduled to be released in the UK in February 2015. But IFC Midnight will make the film available first in the U.S. on November 7, 2014 with a different title–Hangar 10. Hangar 10 will be in theaters and also available as video-on-demand.

Another alien encounter film, Extraterrestrial, is also distributed by IFC Midnight, and is currently available for on-demand viewing.