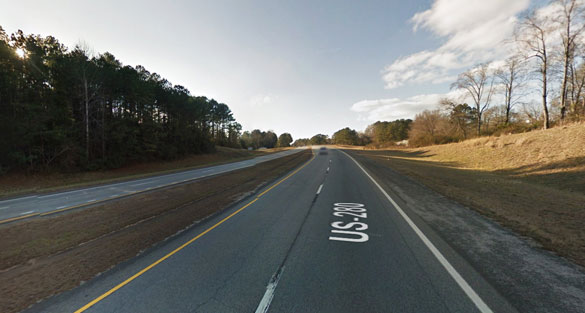 An Alabama witness traveling eastbound along U.S. 280 near Dadeville reported watching a “refrigerator-sized, bright white, louvered-lighted rectangle” hovering over a pine tree about 250 feet away, according to testimony in Case 65649 from the Mutual UFO Network (MUFON) witness reporting database.

The witness was driving just after dark on February 15, 2015, when three lights were first seen in a valley about two miles ahead. 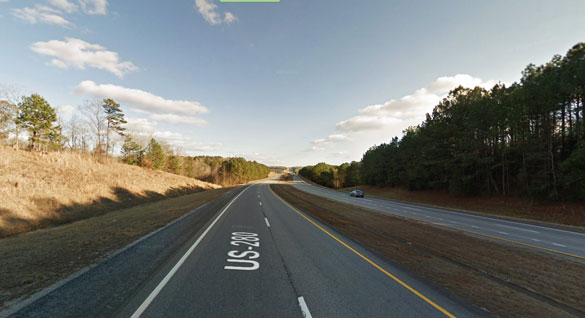 “One later was identified as a tower light about seven miles away,” the witness stated. “As I drove ahead, I noticed that one light flared away. The lights were white and about 350 feet apart.”

The witness said the highway curved, but as he moved closer to the lights, a small fire was noticed in the median to the driver’s left.

“I looked up and saw a very unusual rectangle with bright, horizontal, white-lighted slats that remained motionless about 50 feet above a pine tree that was easy to remember.”

The witness described the hovering object.

“The object appeared to be the size of a refrigerator. I think the sides were covered with 15 to 20 slats on at least three sides. I do not remember the top and bottom. All the slats were brightly aglow with a white light. Houses and a few buildings are nearby but none was near the object. Many cars were headed in the opposite direction. I drove on as I had a passenger. Passenger was too low to see the object.” 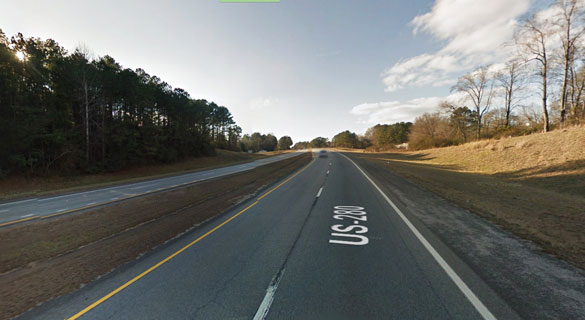 As he approached the area, the witness noticed a fire in the median area and a rectangle-shaped object hovering above nearby trees. Pictured: A stretch of U.S. 280 near Dadeville. (Credit: Google Map)

Out of curiosity, the witness returned to the scene the following day.

“I stopped and examined the fire with a bit of hesitation because of the possible dangers of what could have started the fire. The fire was about as big as two king-sized beds. There were some two foot pieces of logs in the fire area that had come off the numerous log trucks but, otherwise, the fire location was normal for burnt grass.”

The witness has never seen anything like this at this location in the past.

“I am 100 percent certain that the object was not again at the first location as nothing was located there on numerous other trips day or night. Someone could have had an object in the sky, but I doubt that to be the case.”

The witness does not believe the object was a drone.

“If the object was a drone, the size was very large. I do not think the object was tethered either. I saw no means of motion. I did not see it move up close. I heard nothing because I was in a closed car on a cold night.” 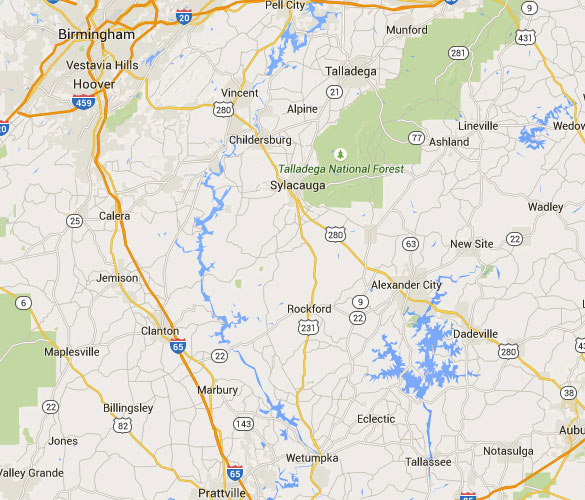 Dadeville is a city in Tallapoosa County, Alabama, population 3,212. Please remember that most UFO sighting can be explained as something natural or man-made. The above quotes were edited for clarity. Please report UFO activity to MUFON.com.