A glowing UFO in Devon, England was photographed on Sunday night. 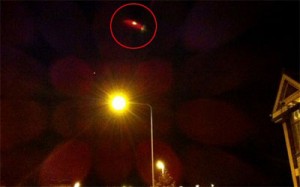 A glowing UFO in Devon, England was photographed by witness Gary McDermott on the night of Sunday, January 22.

McDermott reportedly stopped his car to take a picture of a low-flying helicopter. That is when he noticed the UFO. According to The Telegraph, the UFO was a red disc-shaped object with bright flashing lights. McDermott explained, “It must have been a UFO – and I cannot believe I am saying that because I don’t believe in them usually. I am always sceptical. But this was definitely not a normal aircraft. It was red, the shape they say UFO aircraft is, and had two bright lights coming out of it.”

The unknown object disappeared almost immediately after McDermott saw it.

The object in McDermott’s photo appears more cigar- or blimp-shaped than disc-shaped. And while the object in the photo looks very much like a dirigible, the witness’s description of how the UFO vanished before his eyes is not consistent with the behavior of dirigibles. According to The Telegraph, Devon police said they did not received any UFO sighting reports in the area that night.