A Colorado police officer at Wheat Ridge reported watching multiple unknown lights near ground level during a routine property check where video surveillance backed up the report, according to testimony in Case 57173 from the Mutual UFO Network (MUFON) witness reporting database.

The police officer pulled into Anderson Park at 1 a.m. on June 19, 2014, during a routine patrol, in Wheat Ridge. 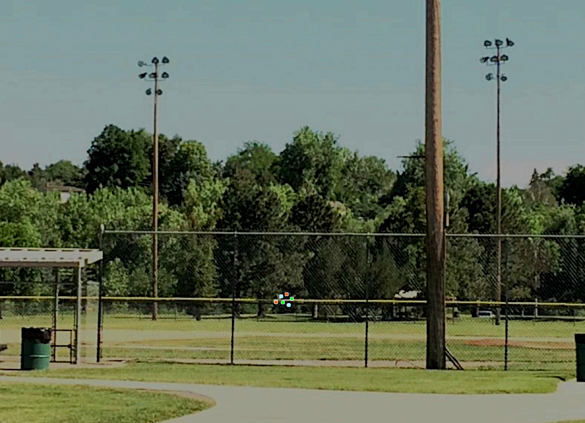 The UFO is illustrated in this daytime photo of the area where the office saw the object. (Credit: MUFON)

“As I began driving towards the back I see five or six lights; two red, two blue, and two green, or it was two red, three blue, and one green,” the witness stated.“The lights were near a tree line on the other side of a softball field and about 150 yards away.”

The witness reported that the lights were clustered around each other at various heights in a kind of oval shape.

“I would estimate the lights were clustered around something the size of a car and were about three feet away from each other. The lights looked like LED quality light and were as bright as car headlights, not moving, and each light was about the size of a softball.” 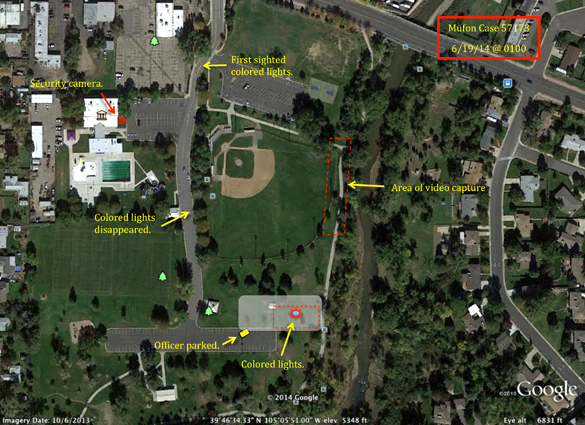 The officer watched the lights as he pulled into the park.

“As I drove into the park the lights did not change in intensity or move like a directional light would as you move a flashlight around. As I drove I observed the lights from about the 5 o’clock to the 4 o’clock position covering about 50 yards and there was no change in intensity of the light or any idea as a direction they were pointing; thus giving me the impression they were some kind of dome light or spherical in nature.”

The officer stated that he did not see any beams of light that lit up the grass or trees around it like a car headlight would do.

“I looked at this for about five seconds and then all of a sudden the lights go out simultaneously. To clarify, there is no way the light was emitted from separate sources. The lights went out at exactly the same time and had to have been controlled from a single source.” 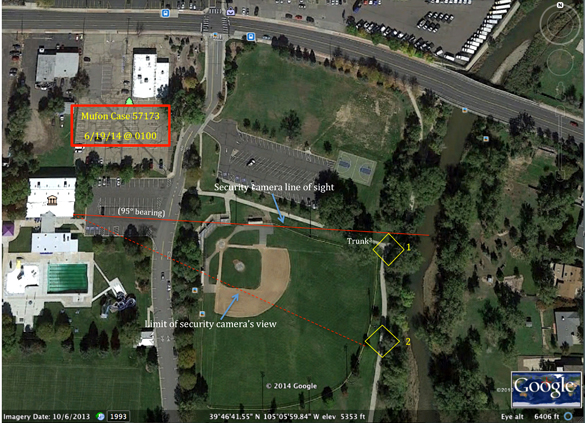 The officer then called the sighting in on the police radio saying that hewas going to check the park as he had just seen some strange lights.

“The radio works just fine. I go check the area and observe that the trees and grass are frosted over with freezing dew and I could see my breath. The low that night was 52 so it was probably about 55 degrees, possibly lower due to the proximity of nearby Clear Creek. I did not observe this frost anywhere else in the city that night and I was near another water source in a different part of town about two miles away and one hour earlier and did not observe the frosting of the vegetation.”

The officer turned on his spotlight and could see what appeared to be snow falling in the beam of his light.

“I remember thinking, ‘Is it snowing? No it’s too warm. Is this ash from a forest fire? No there’s no fire and I don’t smell smoke.’ I then walked onto the freshly frosted grass and see no signs of disturbance on the grass. There is a bike path near there so I go to the bike path and turn off my flashlight and stand still for about 20 seconds to see if I can hear anything (like kids laughing). As I am standing in the half-moon light my hand goes to my gun and I think to myself slowly, ‘I’m gonna go back to my car.’” 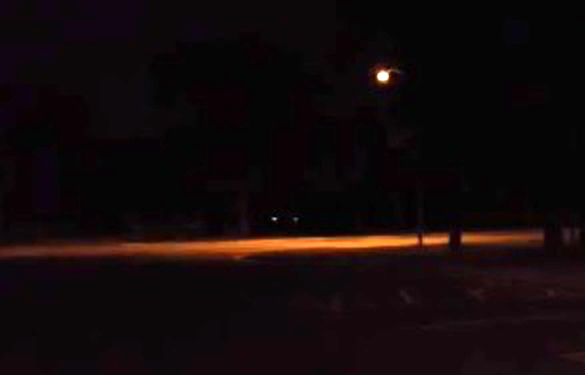 “It wasn’t a physical feeling that made me uneasy, but not knowing what I was dealing with made me feel vulnerable. I went back to my patrol car and throughout the night parked nearby to see if the lights came back and they never did. I went back to the area just as the sun was coming up and did not observe any signs on the ground and the vegetation was no longer frosted.”

The officer attempted to understand what he had witnessed.

“The only rational explanation I can think of is that there were these lights on an ATV on the bike path, but they were arranged asymmetrically and did not appear to be directional. But I would imagine I would have seen the lights move as the ATV drove down the bike path or heard the vehicle driving away. Furthermore, the path goes into the trees and driving an ATV as fast as it would have to have gone for me to not hear it would be insane without lights. There was a traffic signal about 50 yards behind me, but the colors I saw were different hues than traffic signal colors and I have driven that area at that time a hundred times and never seen this. There was no water on my windshield and it was too clear to be a reflection.”

Wheat Ridge is located in Jefferson County, Colorado, population 30,166. Please remember that most UFO sightings can be explained as something natural or man-made. The above quotes were edited for clarity. Please report UFO activity to MUFON.com.