Home / Articles / UFO News / Plasma UFO on video in Russia?
A UFO was seen by multiple witnesses in the sky above St. Petersburg, Russia on Tuesday, April 10.

Plasma UFO on video in Russia? 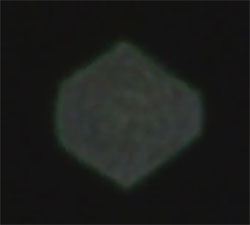 A UFO was seen by multiple witnesses in the sky above St. Petersburg, Russia on Tuesday, April 10.

The Moscow Times reports that this object was recorded on video by at least four witnesses. One witness even claims to have observed the UFO on multiple occasions. This same witness describes the mysterious object as a “plasma UFO.”

The reason for this description is apparent when you watch the video recorded by this witness. The UFO is a light in the night sky, but when the witness does a full zoom-in on the object, it appears to be a non-solid, somewhat hexigon-shaped, structure with a plasma-like interior. This appearance, however, is likely an artificial effect caused by pixelization from the camera’s digital zoom. Some speculate the motionless object is simply a planet. But according to the Moscow Times, “authorities have not weighed in on the sightings.”