A Pennsylvania witness at Philadelphia reported watching and videotaping a cross-shaped UFO hovering nearby, according to testimony in Case 75873 from the Mutual UFO Network (MUFON) witness reporting database.

The reporting witness and his wife were traveling to the Food Truck Fest at Tamproom and 19th in Philadelphia at 5:45 p.m. on April 16, 2016, when the incident occurred.

“We drove over there around 5:30 and parked our car on Lambert and West Porter street where they meet,” the witness stated.“After we parked our car, we start walking west on Porter and turned left and started walking north on 20th street. My wife made a comment about the moon being out overhead and I looked up and noticed this object not moving, just hovering.”

The witness described what they first saw.

“This was in the broad daylight with not a cloud in the sky. My wife and I both watched it hover for about one minute before it appeared to first come down lower from the sky. That is why we got excited because it went from hovering to moving downwards slowly. Then it stopped again and we got more excited. Then it changed directions and started moving southeast slowly and then it stopped again.” 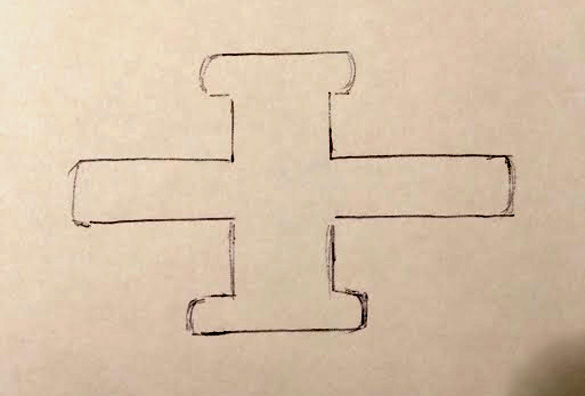 The second witness created this illustration of the shape of the UFO. (Credit: MUFON)

The witness then began recording the object on his cell phone.

“It stayed stationary for a bit. The sun was bright and was hitting my cell phone screen and I could not tell if I was actually pointing my camera in the right direction. So I used the Moon, which was to the right of the object, as a reference. Once I saw the moon on my screen, I panned to the left slowly until I saw it appear as a dot on my screen. I zoomed out to give you a point of reference and you can see some buildings. Then I zoomed back as much as my cell phone camera could. I was wanting to watch this with my own eyes but it was hard because I wanted to make sure I was recording it.”

The object then began to pick up speed.

“The object starting moving east and picking up speed. This is when I put my cell phone down because I had to see this with my own eyes. As it moved father east, it started moving faster and faster and we could tell this object was large and because of how high it was away from us and how big it looked like from where we were standing. The object moved so fast that we eventually lost sight of it. I think we were excited to see one.This time in the broad daylight.”

The witness estimated the distance to the object.

“I would guess it was about 10,000 to 15,000 feet in the sky, but about one mile or less from us. It definitely had a shape to it which appeared to look like a ‘jack’ but maybe with four sides and not six. My wife drew a picture of the shape of what it looked like to us from our point of view. I’ll attach it here with the video. My wife watched it mostly with her own eyes as I was recording it. Unfortunately, I wish my cell phone had a better zoom and higher definition.” 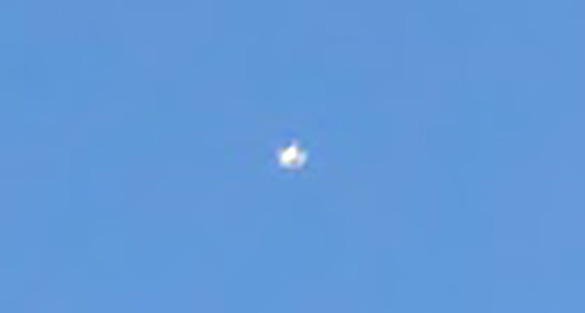 “The witness described himself as an amateur astronomer familiar with sky objects generally and with flares and drones (which drones he himself ‘pilots’ at times),” Bloch wrote in his report.“He was adamant that the movement characteristics of the sighted object could not have been a Chinese lantern or drone. He also stated that the object had a solid shape, which he described as a ‘jack’ (as in the kid’s game). He said his wife, who witnessed it with him and whose comments can be heard in the background to the video attached to the CMS submission, thought it looked more like a ‘cross’ and attached a drawing to the CMS submission. The video attachment clearly shows some kind of solid object. Based on the anomalous shape and movement, as well as the attached video evidence, the FI recommends classifying this sighting as UAV-Unknown.”