With the seemingly endless supply, Hollywood is at work on yet another extraterrestrial-themed movie. But this one falls into the category of extraterrestrial-themed movies geared towards children. As the Hollywood Reporter describes, the movie, titled New Kid, will spin “the feeling of being a new kid in school into an intergalactic story when the kid happens to be the lone earthling in a school chock full of aliens.” 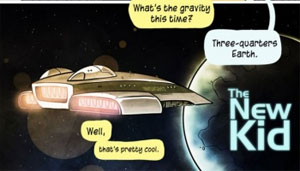 Paramount Pictures announced on Thursday that it had acquired the rights to make an animated adaptation of the Penny Arcade online comic strip The New Kid. Penny Arcade is “one of the few viable webcomic sites that has grown into its own little fiefdom, with a blog, video games, podcasts and an online TV show,” according to the Hollywood Reporter.

The Escapist explains that the plot of the The New Kid comic strip is “centered around a boy and his father talking about how they are constantly forced to move from planet to planet by his father’s job, making the boy a constant new kid at school.”

Book of Eli writer Gary Whitta has been selected by Paramount to write the script for New Kid.

In addition to New Kid, Paramount is also distributing the upcoming extraterrestrial-related movies Super 8 and Transformers: Dark of the Moon, and is also scheduled to distribute Paranormal Activity 3, a Star Trek sequel, and a movie about Area 51.