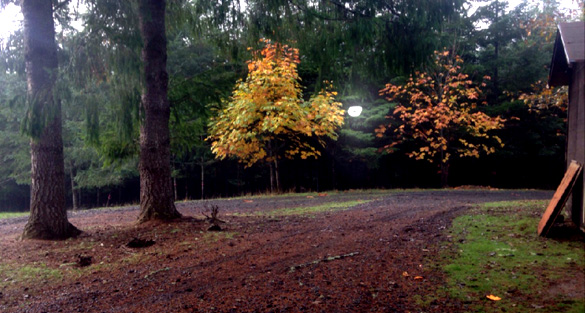 An Oregon witness at Veneta reported watching a bright white light about the size of a basketball moving through his property, according to testimony in Case 72304 from the Mutual UFO Network (MUFON) witness reporting database.

The main events reported are from November 7, 2015, but the witness begins by backing up one day and reports on events that occurred the day before.

“I witnessed a large yellow/orange-ish fireball with a large tail falling from the sky at a 45-degree angle,” the witness stated.“It was moving very slowly if it were a meteor. As it fell it lit up my entire property. I regularly watch meteor showers, and have seen many fireballs, and meteors before. This was far slower, brighter, and a different color than anything I’ve ever seen.” 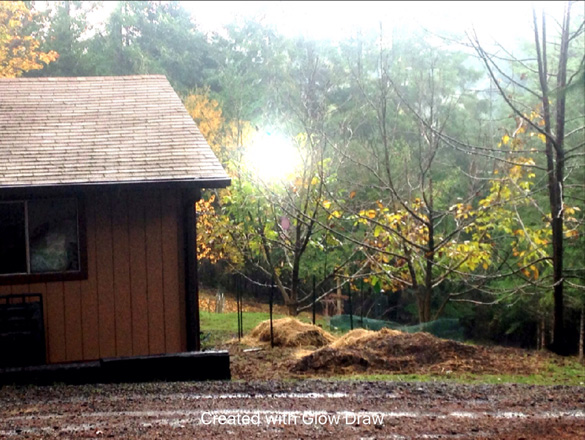 Witness Image 1 showing the area where the object was sighted with an illustration of the light. (Credit: MUFON)

Just before the sighting, the witness was shining a very bright green laser pointer into the night sky.

“I thought to myself – wouldn’t it be weird if something in the sky reacted to my beam. And as soon as I had that thought, the fireball appeared. Because of this coincidence, the appearance of the object startled me, and I watched it as it traveled through the sky and vanished behind the treeline.”

“Within minutes of this sighting, I saw several white streaking meteors in the same general area, but coming from the opposite direction. I don’t know if there is any connection between the white light object witnessed the next night, but I thought I would include it in the report in case there have been similar events witnessed by others.”

The witness then detailed events from November 7, 2015. 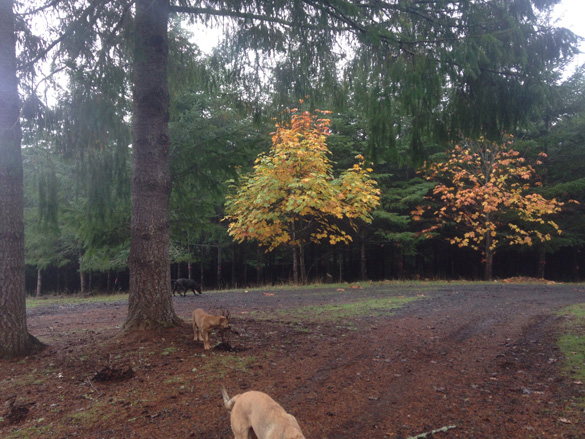 Witness Image 2 showing the area where lights were seen on the property. (Credit: MUFON)

“Last night, my girlfriend and I were out chopping firewood. It was around 5-6p.m., and it was dark out, and it was overcast and raining. As we were getting ready to go back inside, I heard a strange whooshing sound, kind of like a strong breeze through the trees, though it didn’t sound quit right, and the air was very still. It was different enough that I took notice of it.”

Right after the witness heard the noise, all five of his dogs started growling and barking, and ran towards a stand of overgrown Christmas trees on the property.

“They kept barking for a couple of minutes until we called them back. We then gathered the rest of our tools and made our way back to house. After we got inside and took off our raingear, it was a little chilly inside so I grabbed a couple of logs and put them in our woodstove. I noticed that we didn’t have enough wood for the night so I put my coat back on to go get some more firewood. As I walked outside I heard the same whooshing noise as I did earlier only a little louder than before. Again I thought it was odd, but didn’t think much of it.”

The witness then made his way back to where we had been chopping wood and filled the baskets on hisATV with firewood, got back on the ATV, and then noticed the German Shepherd in front of him was looking to the southwest and growling.

“I looked towards the direction she was looking and I saw a very bright, white light about the size of a basketball. It was bright enough that it was uncomfortable to look at. The light startled me. At first I thought maybe it was a neighbor pointing a floodlight at our property, but quickly realized that wouldn’t have been possible as we have a really thick tree cover surrounding us, and we have never been able to see any of our neighbors houses, or lights before.”

The light was just to the left of a cottage on the property and a few feet below the peak of the roof.

“The cottage is on the top of a hill, and behind the cottage the hill drops by 100feet or so down to our property line which is lined by a thick row of very large fir trees. I could not tell how close the object was to me. It could have been behind the small walnut trees to the right of the cottage, but glowing bright enough that I didn’t see an outline of the branches it was glowing through, or it was in front of them. I feel like it was behind them. The tops of the tree’s leaves have fallen off, so you can see pretty well through them.”

When the witness realized that the light was on my property, he had a sudden rush of fear and sped back to the house. 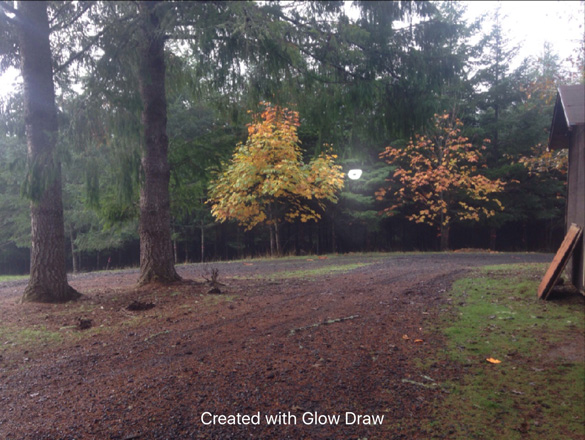 Witness Image 3 showing the area where the object was sighted with an illustration of the light. (Credit: MUFON)

“When I got back inside, I told my girlfriend I had seen a bright light, and before I could continue describing what I saw, she asked, ‘You saw the light?’ I asked her when she saw the light, and she told me that when the dogs were barking earlier when we were chopping wood, she saw a light up in the Christmas tree stand across from us. She thought it was odd, but decided it must be the neighbors. I then explained where I saw the light I saw and how large it appeared. She said the light she saw was much smaller but moving through the trees.”

At that point the witness suggested that they go back outside and check it out.

“While she was getting her coat and boots on, I went outside and sat on my ATV. As soon as I sat down, I heard the whoosh sound again, and the sound intensified, and then faded away. By the time we got out to where we saw the lights, they were gone.”

They then drove around the perimeter of the property and saw nothing.

“I drove back to where we were chopping wood and explained to my girlfriend where I saw the object, and she showed me where she saw the object. I went out this morning to take pictures of where the incident took place and drew glowing dots on the photos approximately where the objects we saw were. What startled me when I looked at the area where my girlfriend saw the light, was that the light must have been in the middle of the canopy of the Christmas tree stand. The canopy is so dense you cannot see through it. So that’s my report. I am sorry if it is a little long, and not very exciting, but I wanted to give as much detail as I could while it was still fresh in my mind.”

Veneta is a city in Lane County, Oregon, population 4,561. Please remember that most UFO sightings can be explained as something natural or man-made. The above quotes were edited for clarity. Please report UFO activity to MUFON.com.