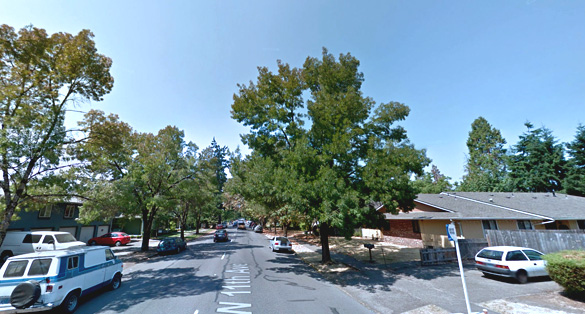 An Oregon witness at Eugene reported watching a triangle-shaped UFO with three orange lights that eventually cloaked itself and disappeared, according to testimony in Case 79421 from the Mutual UFO Network (MUFON) witness reporting database. 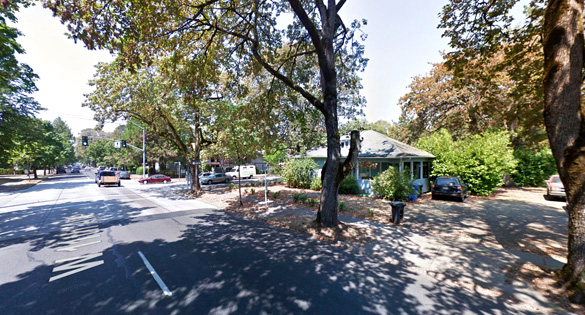 The witness noticed that the three lights were moving in unison. Pictured: Eugene, OR. (Credit: Google)

The witness – who is a military veteran and amateur astronomer – stepped outside at 8:15 p.m. on September 25, 2016 and noticed a triangle-shaped object over the city.

“I had just stepped out on my balcony for a smoke and sat down in my chair facing east overlooking most of northeast Eugene and north Springfield,” the witness stated. “Looking in the sky above and well beyond the neighbor’s house at the sight line of the power lines, I saw three orange lights equidistant apart and in a triangle.”

But the witness was sure that there should be no bright stars in the sky in that area that time of night and time of year. 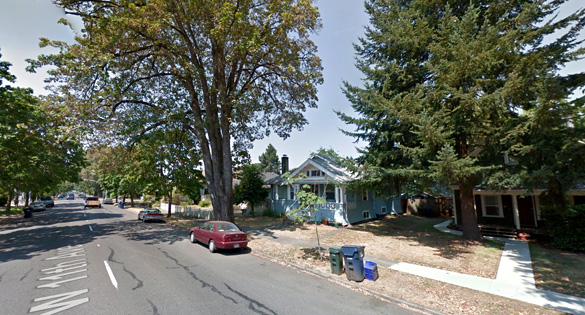 The lights seemed to be shimmering as if the object was cloaking. Pictured: Eugene, OR. (Credit: Google)

“As I looked closer, I saw the bottom most of the lights moving, and then I thought to myself – that makes sense. It is commercial aviation. So I looked back at the other two lights and saw they were moving together too and that it was one triangle-shaped craft rotating on its center axis. All the while I noticed the bright orange lights were shining through what looked like heat shimmer coming off the desert floor. Very much like a scene from the movie ‘Predator’where the ‘cloaking’ around it wavered for just a brief second, and when it did, I saw a large triangle-shaped craft with smooth sides and a smooth metallic bottom with a smaller, circular abutment in the center with a light bluish glow.”

The witness watched as the object appeared to stop moving.

“The craft stopped rotating and it looked like a harrier jet pulling up its nose on a vertical takeoff and then it disappeared. It did leave, but as it was leaving the ‘cloaking’ kicked back in and it disappeared from sight. Like something out of the ‘X files.’” 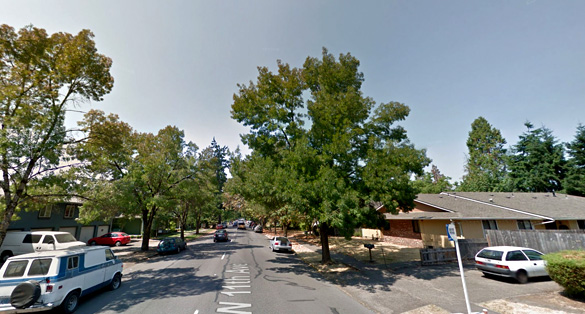 Two helicopters showed up in the same area once the object disappeared. Pictured: Eugene, OR. (Credit: Google)

“Two helicopters showed up within 30 seconds of the object disappearing. Eugene is a small city and helicopters are fairly rare here with just a couple of overflights a day, but these stayed on station for the better part of an hour circling over the Eugene/Springfield area.”

Oregon MUFON State Director Tom Bowden is investigating. Eugene is the county seat of Lane County, OR, population 160,561. Please remember that most UFO sightings can be explained as something natural or man-made. The above quotes were edited for clarity. Please report UFO activity to MUFON.com.