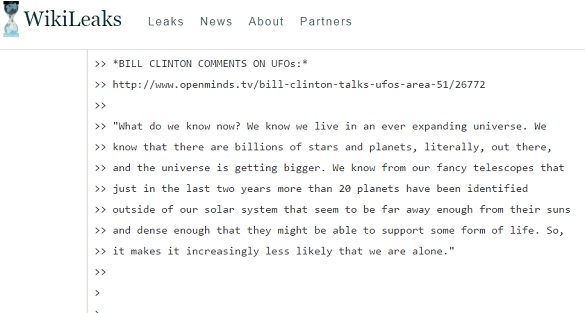 One of the big stories during the election was the release of leaked emails by WikiLeaks of the alleged emails of Hillary Clinton’s campaign manager, John Podesta. Among these emails were the behind the scenes organizing of Hillary’s appearances on Jimmy Kimmel Live! On her latest appearance on the program, she discussed UFOs, and apparently, her staffers used an OpenMinds.tv article as background regarding Bill Clinton’s prior UFO comments. 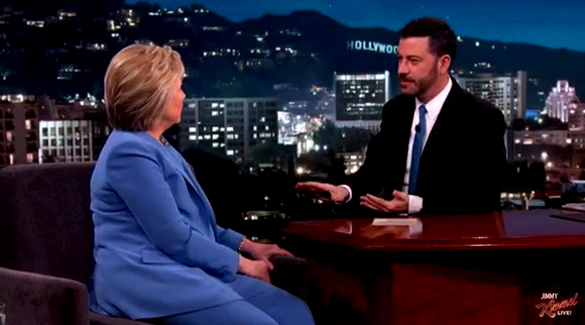 It was expected by many that Kimmel would be asking Hillary about UFOs because he had previously asked Bill Clinton and Obama about them. In Podesta’s email we learned that her campaign was helping shape the scripting of the question and her response. 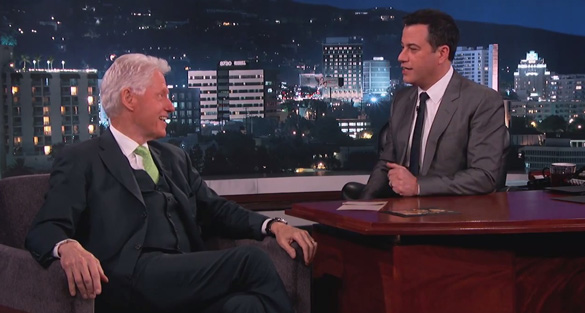 However, in one particular email an individual on Hillary’s campaign staff was confused as to why Kimmel would want to talk to Hillary about UFOs. In a reply to that question, there were two stories referenced as background. One was a Mother Jones article, and the other was an article from OpenMinds.tv. The later was used to give background on Bill’s appearance on Kimmel’s show, but it also outlines his history of interest in UFOs, as well as that of Podesta, who is referred to as JDP in the email.

The entire email string can be read on this WikiLeaks page, or right here…

Subject: Re: UFOs and Jimmy Kimmel

he thinks it would be awesome and funny, if she explained that you don’t

use the term UFO anymore…

‘Jimmy if you talk about UFOs, people think you’re nuts – you have to use

and when I’m President, the american people will find out !!

John’s line is – the american people can handle the truth

> the question seems odd ? is there any further context on why Jimmy is

> going down the alien road ??

>> Jimmy Kimmel is planning to ask HRC about UFOs and area 51. Jimmy

>> Kimmel’s producer noted that Podesta is particularly interested in the

>> topic. The producer cited the Mother Jones story below titled “ETs for

>> Hillary: Why UFO activists are excited about Clinton presidency”, in it

>> they quote Podesta’s comments on the topic. I’m also including comments

>> Bill Clinton made on the topic. Schake thinks Podesta could help us develop

>> out about their strong interest in UFOs and area 51. Mother Jones had an

>> article this spring titled, “ETs for Hillary: Why UFO activists are excited

>> about Clinton presidency”. Is there a reason they should be excited? Are

>> you ready to make a campaign promise to this critical constituency tonight?*

>> believes in their cause—despite having never spoken publicly about it. In

>> particular, they are encouraged that John Podesta, Bill Clinton’s former

>> chief of staff, will likely chair Clinton’s campaign and would likely serve

>> in another Clinton White House. As a self-described “curious skeptic,”

>> matters. In his forward to UFOs: Generals, Pilots, and Government Officials

>> time to find out what the truth really is that’s out there. The American

>> people—and people around the world—want to know, and they can handle the

>> Podesta’s interest in extraterrestrial phenomenon is nothing new. In

>> X-Files’—especially FBI agent Fox Mulder, with whom he shares a penchant

>> for obsessiveness and paranoia.” Grant Cameron, a Canadian UFO researcher,

>> unsuccessfully tried to get the Clinton Library to release records

>> Asked for clarification of Hillary Clinton’s stance on UFO disclosure, a

>> spokesman from her office responded via email. “Our non-campaign has a

>> strict policy of not commenting on extraterrestrial activity,” Nick Merrill

>> “What do we know now? We know we live in an ever expanding universe. We

>> know that there are billions of stars and planets, literally, out there,

>> and the universe is getting bigger. We know from our fancy telescopes that

>> and dense enough that they might be able to support some form of life. So,

>> it makes it increasingly less likely that we are alone.”

So why are we only posting a story about this email now, when the election is long over? Well, although we did cover the existence of these WikiLeak emails discussing Hillary’s comments on UFOs on Jimmy Kimmel Live!, somehow I missed the reference to one of my own stories. I was made aware by Ben Hansen. He is going to speak at the 2017 International UFO Congress on his voice and body language analysis of comments made on television by the Clintons and Obama regarding UFOs. While preparing his talk, he asked me about the above email with the reference to OpenMinds.tv, and that is how I found out. Thank you, Ben. 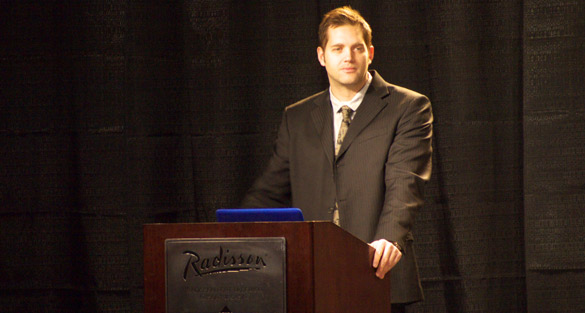 Hansen’s talk will shed light on whether there is any indication the Clintons or Obama had something to hide while talking about UFOs or aliens on TV. He has a couple of videos on YouTube where he takes a look at these appearances in details, but he will be sharing much more analysis at next month’s conference. Don’t miss it!