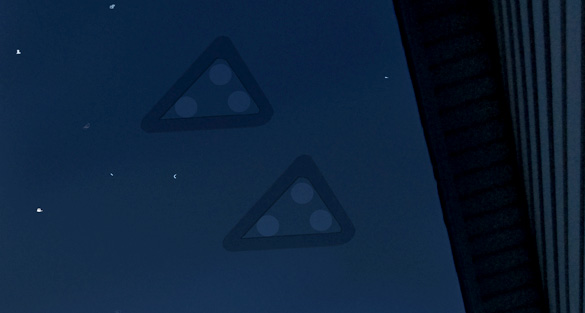 An Ohio witness at Mayfield Heights reported and illustrated two triangle UFOs that moved overhead side-by-side silently without any lighting, according to testimony in Case 69953 from the Mutual UFO Network (MUFON) witness reporting database.

The witness and his wife were outside on a front porch about 11 p.m. on August 15, 2015, on a clear night with stars visible when the objects were first seen. 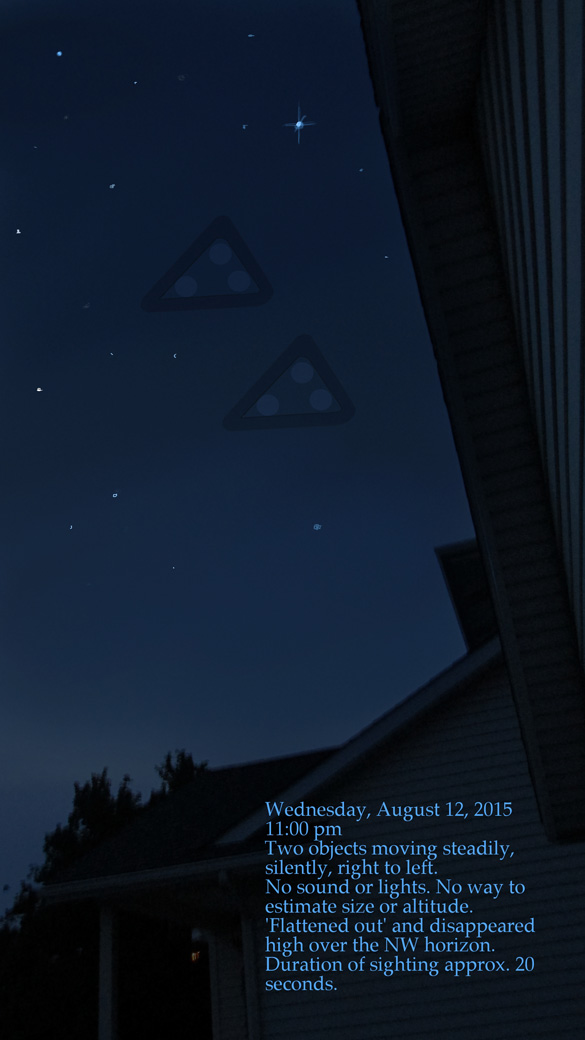 “I’m 54 years old, sane and sober,” the witness stated. “I was staring up at the sky, not seeing any meteors and just relaxing. There’s no roof on my porch; it’s like a deck. Suddenly over my right shoulder, and over my house, I see two very dark objects moving silently over my street, then over the houses across the street and then disappearing into the northwest.”

The witness immediately pointed out the objects to his wife. 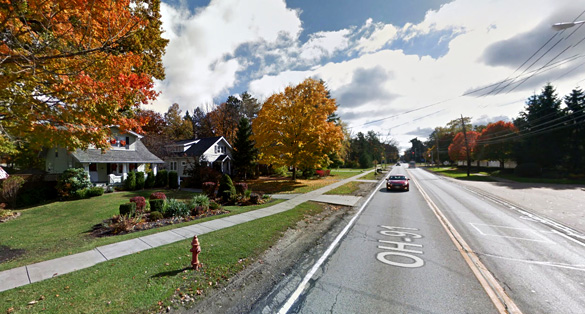 “My wife, who has bad night vision, couldn’t see what I was pointing at. The objects were very dark, almost silhouettes. They blocked out the stars as they passed. That’s why I knew I wasn’t seeing things. I couldn’t figure out how high up they were or how big they were. One instant I thought they were kites or something but I knew they weren’t as I watched them move across the sky.”

“They were triangle-shaped when they were directly overhead, but then they ‘flattened out’ as they moved off into the distance. I tried really hard to get my wife to see them but they were so hard to see she never looked in the right place.”

“As soon as I saw them I had a creepy feeling, like these things were not meant to be seen. I can’t explain it, but that’s the thought that ran through my head. I didn’t think about ‘aliens’ or ‘extraterrestrials’ but I knew I had never seen anything like it, and for some reason, I believe I never will again. They were completely silent and had no lights whatsoever, but they did have some king of design on them.” 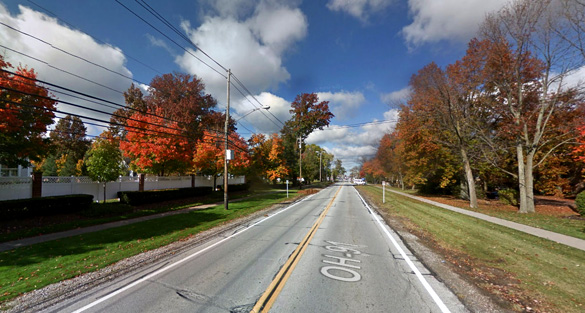 The objects made no sound and had no lighting as they moved overhead. Pictured: Mayfield Heights, Ohio. (Credit: Google)

The witness first thought the objects were connected.

“Like I mentioned, there were two of them but they moved in such unison that when I first saw them my mind was trying to process them as one object, but after a second or two I saw that they were not connected. I drew a picture of what I saw and will include it. I’m an illustrator and have extensive experience in photo-retouching, if you wonder about the image. I can reproduce what I saw very well and the image is as close as I can remember. I sat on my porch and took a picture, and then drew the crafts in on my computer.”

Mayfield Heights is a city in Cuyahoga County, Ohio, population 18,827. Please remember that most UFO sightings can be explained as something natural or man-made. The above quotes were edited for clarity. Please report UFO activity to MUFON.com.