Ben Hansen, former host of the SyFy Channel’s Fact or Faked: Paranormal Files, took a careful look at Obama’s recent appearance on Jimmy Kimmel, especially the portion in which Kimmel asked Obama about UFOs. Hansen says his analysis has given him some “huge” revelations, including that Obama was not joking when he told Kimmel that he can’t reveal what he knows about UFOs and extraterrestrials.

Hansen has a background in law enforcement. However, he points out in his video analysis – which he posted on YouTube (seen above) – that he is not a body language expert, just someone with a lot of experience conducting criminal investigations and interviews, and working with body language experts.

Last year, after Kimmel asked former president Bill Clinton about UFOs, Hansen decided to put his experience to use, and analyze what Clinton had said. His conclusion was that there was, “Evidence of significant apprehension, stress, and guarded behavior. Several times when he started down a road and stopped himself in awkward ways as if he was about to say something he shouldn’t.”

This led Hansen to believe that Clinton knew more than he was sharing or he learned just enough to indicate that he should stop looking.

Earlier this month, Obama appeared on Jimmy Kimmel Live!, and Kimmel decided to ask him about UFOs as well. In the interview, Kimmel indicates that he may have seen Hasnen’s Clinton analysis. Kimmel warned Obama that people were going to look at his facial expressions and every move as he answered these questions to analyze what he was saying.

Kimmel’s short exchange with Obama about UFOs included a lot of jokes, and both Kimmel and Obama seemed to be enjoying themselves, but the question is, “Was Obama really joking?”

The conventional wisdom is that he was. However, Hansen says his analysis shows that the non-verbal communication Obama was displaying tells another story.

Another aspect of the interview that Hansen felt may indicate there is more going on is the joking itself. He notes that each of Obama’s jokes ” interrupts, delays, and deflects Kimmel’s original question.”

Hansen says it is possible the jokes were an “attempt to influence Jimmy to drop the subject.” Hansen says jokes are often used to belittle a person into feeling silly for asking the question in the first place.

Hansen notes that Obama has used humor all of the very few occasions he has talked about UFOs. Hansen interviewed Huffington Post writer Lee Speigel about a UFO joke Obama made that did not go over so well. Speigel told Hansen that during Obama’s first visit to Roswell, New Mexico, Obama told the crowd that the first thing he said when he had landed was “I come in peace.” Obama then went on to say that he is often asked about UFOs by 9 and 10 year-old boys, and he often tells them “If I told you I would have to kill you.”

Speigel told Hansen that he felt that last joke was in bad taste, and that the crowd must have agreed because only a few people in the crowd laughed. 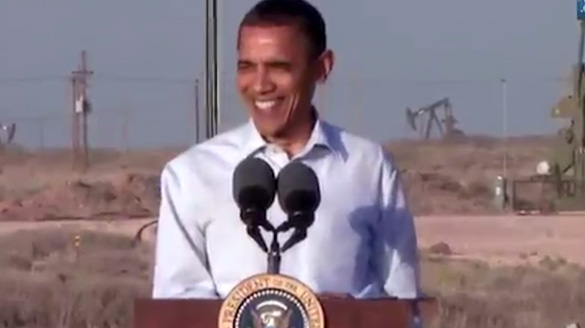 Obama addressing the crowd in Roswell.

Hansen wonders if Obama uses humor when he talks about UFOs because he is “uncomfortable telling the truth about what he may know,” or if it is “due to a fear of ridicule if he takes the subject seriously.”

In the video, Hansen asks, “Might he know more now than he did before he was president?”

The biggest revelation for Hansen comes during the last part of Kimmel’s UFO line of questioning. Hansen notes that despite all of Obama’s joking, Kimmel persists.

Hansen says, “Obama makes more jokes, but Kimmel is not dissuaded. Kimmel asks, ‘Did you look, did you see, did you explore?'”

“Almost immediately, you are going to see Obama do a series of things that paint a very interesting picture,” Hansen explains.

Hansen says Obama completely changes his demeanor at this point from “comedian” Obama to “guarded” Obama. Hansen says Obama’s smile changes from genuine to more of a look of annoyance. He also says Obama breaks eye contact, which is not unusual for Obama.

Hansen notes that in past interviews Obama often breaks eye contact to look down and to the right. Using Neuro-linguistic Programming (NLP) protocols, this often means someone is having an internal dialogue. Hansen says for Obama this seems to be a cognitive process when he “requires precision in answering difficult questions.” 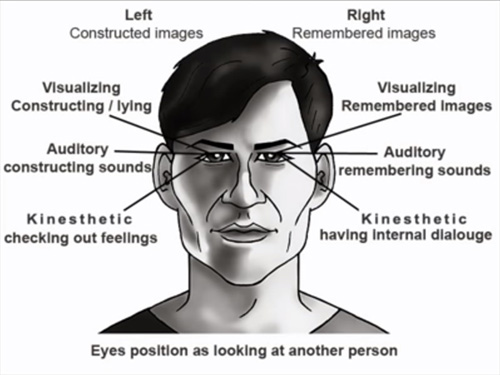 Another thing Obama does at this point is shut his eyes a couple of times, both of which Hansen says were longer than just a normal blink. Hansen notes this could be due to someone trying to block out unpleasant auditory or visual cues. He notes that this is accompanied by a hard swallow, flexing of the jaw, a head turn away from Kimmel, and shaking of the head “No” with a stuttered reply.

Obama’s simple reply was, “I can’t reveal anything.”

Hansen says there is no way to tell if Obama’s earlier replies were anything more than a joke, but Obama’s demeanor change with this reply indicate to him that Obama, in this case, was telling the truth.

He likens Obama’s demeanor to a guy being asked to go fishing with his buddies, but can’t because his wife wants him to clean the garage. He doesn’t want to talk bad about his wife to his buddies, so he simple replies, “Sorry guys, I can’t.” 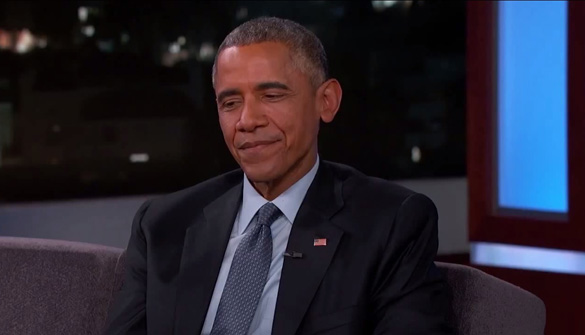 Hansen feels that Obama’s demeanor change is clear, and like the guy with his wife, out of duty, Obama appears to  be serious when he says he can not reveal anything further. Hansen says, to Obama, this sentence “is no longer a joking manner.”

Hansen explains, “This is a serious matter to Obama and everything points to supporting that he truly is not permitted to discuss it. That doesn’t mean he personally knows anything about an extraterrestrial presence. It means that who he talked to, why and when are not for public disclosure.”

Hansen also points out that John Podesta, a counselor to Obama and former Chief of Staff for Bill Clinton, recently tweeted about UFOs. Podesta has had a long time interest in UFOs, and is leaving the Obama administration in order to help with Hillary Clinton’s presidential campaign. On his last day with the White House, Podesta tweeted: “Finally, my biggest failure of 2014: Once again not securing the #disclosure of the UFO files.”

Hansen notes that many have reported that Obama denied any knowledge about UFOs or aliens. However, Obama never made that claim. (Credit: Ben Hansen/YouTube)

Most have seen this tweet to be a joke. However, Hansen interviewed Bryce Zabel, a filmmaker and former CNN correspondent, who says he thinks Podesta was serious.

Hansen wonders if the timing of the Podesta’s tweet and Obama’s discussion with Kimmel about UFOs was a coincidence.

Hansen’s analysis of Clinton’s Jimmy Kimmel Live! appearance can be seen below:

You can read more about Ben Hansen at www.BenHansen.com.