Last night President Obama appeared as a guest on Jimmy Kimmel Live, and just as he had done with President Clinton, Kimmel asked Obama if he looked into Area 51 and UFOs.

Kimmel broached the topic in the same manner he had with Clinton. He told the president that if he was president the first thing he would do is immediately look into what the government knows about Area 51 and UFOs. Obama told him this is why he will not be president.

Kimmel then asked if Obama had looked into it. Obama replied, “The aliens won’t let it happen. You will reveal all of their secrets. They exercise strict control over us.”

Kimmel warned Obama that people were going to look at his facial expressions and every move as he answered these questions to analyze what he was saying.

Obama then responded, “I can’t reveal anything.”

Kimmel told the POTUS that Clinton has told him he looked into it and didn’t find anything.

To this, Obama responded, “That is what we are instructed to say.”

That was the extent of their extraterrestrial discussion.

If you were to read this without watching the video, this conversation would sound somewhat ominous, and I am sure some people will take this as a confirmation that aliens are controlling the government. However, Kimmel and Obama were smiling and laughing the whole time. Kimmel certainly felt the President was joking, and seemed to find his responses very funny. 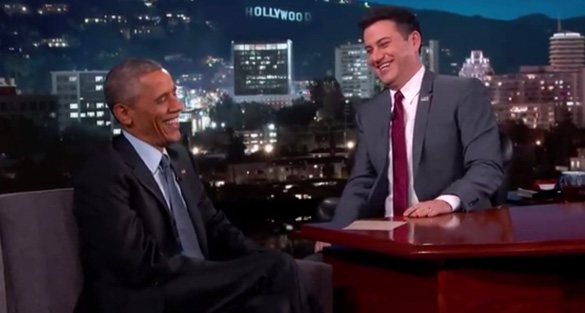 Jimmy Kimmel and President Obama laughing it up about UFOs and aliens. Video can be seen at the top of the story. (Credit: Jimmy Kimmel Live)

Here is a transcript of the conversation:

Kimmel: This is something I feel like. If I was the president, and it is unlikely that is ever going to happen…

Kimmel: If I was the president…

Obama: It was unlikely that I was going to be president.

Kimmel: The moment I was in inaugurated – my hand would still be hot from touching the bible – I would immediately race to wherever they have the files about Area 51 and UFOs and I would go through everything to find out what happened. Did you do that?

Obama: That is why you will not be president…

Kimmel: One of the reasons.

Obama: Because that is the first thing you would do.

Kimmel: It is at the top of my list.

Obama: The aliens won’t let it happen. You will reveal all of their secrets. They exercise strict control over us.

Kimmel: Now you know there are a lot of people who are going to examine your facial expressions here, every twitch, every everything and say, of course. Did you look? Did you see? Did you explore?

Obama: I can’t reveal anything.

Kimmel: Oh really? Because President Clinton said he did go right in and he did check and there was nothing.

Obama: You know, that is what we are instructed to say.

The conventional wisdom is that Obama was kidding around with Kimmel and giving silly answers. However, not everyone will feel this way. In fact, Obama’s joking about aliens has been misconstrued and made news before.

A few years ago, Will Smith took his family for a visit to the White House, and while in the Situation Room, Smith’s son, Jaden, asked the POTUS if aliens were real. Jaden told Wonderland Magazine: “I talked to President Obama about extraterrestrials. He said he could neither confirm nor deny the existence of aliens, which means they’re real. If people think we’re the only people that live in this universe, then something is wrong with them.”

This also isn’t the first time a POTUS’ comments about aliens has started a debate as to whether it was a joke or not. In 1982, Steven Spielberg was invited to the White House to screen his movie ET: The Extraterrestrial with President Ronald Reagan. Spielberg says after the screening Reagan stood up and, according to Speilberg, said, “I wanted to thank you for bringing E.T. to the White House. We really enjoyed your movie.” Spielberg says Reagan looked around the room and continued, “And there are a number of people in this room who know that everything on that screen is absolutely true.” 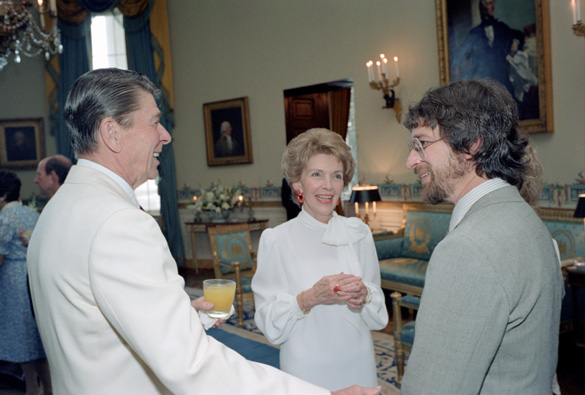 Spielberg says the room erupted in laughter. When asked whether he thought Reagan was joking or not, Speilberg said, “I’m a little bit of a Ufologist. I was hoping that there was something more to the joke than met my eye. I’m sorry to say I think he was simply trying to tell a joke.”

In all of these instances a number of people have argued that the POTUS’ were all telling the truth about an alien cover-up and these were not actual jokes. Kimmel seems to be aware of this fact when he warned Obama that his every movement would be scrutinized.

Indeed, when Clinton appeared on Kimmel’s show and discussed UFOs and aliens, his answers were carefully analyzed.

Ben Hansen, former host of the TV show Fact or Faked: Paranormal Files, has a background in law enforcement. He did a body language analysis of Clinton’s interview. He says he felt there were signs that Clinton was stressed about the line of questions. He admits this does not mean that Clinton was hiding alien secrets, but he feels it may indicate that Clinton knows more than he was willing to reveal.

Given Kimmel’s warning, I wonder if he saw Hansen’s analysis? Either way, he is probably 100% correct in his prediction that Obama’s comments will be carefully analyzed.

In the end, Obama has always given every indication that he has no interest in UFOs. During his first campaign for president, during a presidential debate, Dennis Kucinich was asked about a UFO sighting he had that was written about in a book by Shirley MacLaine. After he squeamishly answered, the moderator, Tim Russert, asked Obama if he believed in life on other planets. Obama answered: “You know, I don’t know. And I don’t presume to know. What I know is there is life here on Earth, and that we’re not attending to life here on Earth.”

Although, it should be noted Obama was the first President to use the words “Area 51” in public. Even though Clinton has said several times he looked into it, he always talked about a secret base in the desert. The name “Area 51” has been unacknowledged until recently.

In 2013, the CIA finally unredacted the name Area 51 in previously classified documents, which has been taken as an official acknowledgement of the base’s existence.

After a moment of laughter by the audience, Obama continued, “I think I just became the first president to ever publicly mention Area 51. How’s that, Shirley?”

Obama’s comments about MacLain begin at the 9:40 mark.

So now the debate in UFO circles can begin. Was Obama really joking? Or is he hiding a nefarious secret in plain sight while getting a few laughs in the process?

Bob Lazar, the man who began the controversy surrounding Area 51 that made it a household name and synonymous with aliens and UFOs, recently address made a rare public appearance at the recent 2015 International UFO Congress: