Curious New Yorkers stopped to look up yesterday as multiple UFOs were visible in the afternoon sky above Manhattan's West Side. 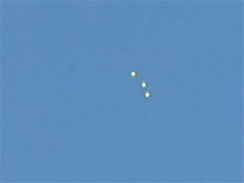 Curious New Yorkers stopped to look up yesterday as multiple UFOs were visible in the afternoon sky above Manhattan’s West Side. Many called 311 (the city’s help line), the NYPD, and the FAA seeking information about the strange objects. FAA spokesman Jim Peters told the Washington Post, “Every once in a while you get phone calls from people who see something they can’t explain.”

The UFOs were described by some as silvery or shiny, and hovering or bobbing. Some witnesses reported seeing up to 50 UFOs at one point. The FAA said they received reports of something that was “yellow with blue lights surrounding it.” The FAA was unable to detect anything in the sky at the time of the sighting. Many suspect that the mysterious objects were merely balloons, but police are not investigating the incident, and city officials also agree with the balloon theory. 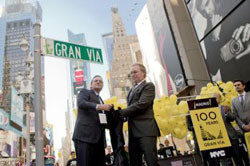 There were several balloons in Times Square yesterday for a 100th anniversary celebration of Madrid’s Gran Via Avenue.

As the sightings were taking place yesterday, the news was almost immediately picked up by media outlets all over the world. This incident is just another example of how mainstream media is giving more attention to UFOs. But with the one-year anniversary of the infamous “Balloon Boy” incident just one day way, and with the repeatedly inaccurate reporting of other stories like the UFOs in China, hopefully the mainstream media will learn that UFO stories require just as much research (perhaps more) as any other news story.

The story of the UFOs over New York is still making headlines today.