Home / Articles / North American UFO tourism
Several British travel agencies are pushing "UFO Tourism" in an effort to draw UFO hunters to destinations that have somewhat regular UFO activity. While this marketing campaign is new to the travel agencies, UFO Tourism is not a new concept, and certainly not something unique to the U.K. 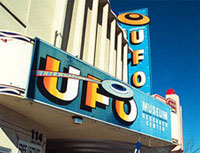 Several British travel agencies are pushing “UFO Tourism” in an effort to draw UFO hunters to destinations that have somewhat regular UFO activity. While this marketing campaign is new to the travel agencies, UFO Tourism is not a new concept, and certainly not something unique to the U.K. There are several destinations in North America to which thousands of UFO believers, enthusiasts, and researchers flock each year, including sites of famous UFO encounters, locations with regular UFO activity, and even conferences specifically dealing with the topic of UFOs. Here are just a sample of these destinations:

Roswell, New Mexico, USA
In the summer of 1947, a UFO allegedly crashed northwest of Roswell, NM. Since then, the name “Roswell” has become analogous to the term “UFO,” and the city has embraced the attention from the incident. The city of Roswell hosts an annual UFO festival that draws thousands of people every year. There are a variety of UFO shops in the city, and even a UFO museum to entertain visitors.

Shag Harbour, Nova Scotia, Canada
An investigation was conducted in October of 1967 after a UFO allegedly crashed into Shag Harbour. Like Roswell, Shag Harbour has become a tourist destination, complete with an annual festival and a UFO museum.

Highway 375, aka the Extraterrestrial Highway

Area 51, Nevada, USA
The top secret military base known as Area 51 is located north of Las Vegas, NV. This is a site where the military has allegedly stored retrieved UFOs and worked on reverse-engineering alien technology. The highway that leads to Area 51 is Highway 375, which the state of Nevada changed to “The Extraterrestrial Highway.” The closest town to the Area 51 site is the small town of Rachel, where the main attraction is the Little A’le’Inn.

Mexico City, Mexico
The capital city of Mexico is well-known for being a hotbed of UFO activity. Mass sightings are quite common, and UFOs are frequently captured on video in the Mexico City skies.

UFO X Fest – San Leandro, California, USA
The UFO X Fest is coming to California’s bay area, and will include films, entertainment, and informative speakers. The UFO X Fest takes place September 18th-19th at the historic Bal Theatre in San Leandro, CA. Alejandro Rojas from Open Minds will be presenting at this event.